When I finally dragged myself out of bed, then out of the house, there was some lovely spring weather waiting for me. I am lucky to live in such a beautiful place and have these beautiful beaches to walk.

Again, the Texture Time KAL is the main feature of this show. I came to the big realisation that I’m going to be way behind. As I write this, the 5th and final Clue has long been released as probably has the big reveal. I have started on Clue 3, ignoring Clues 4 and 5 and I’m not ready to see the finished product. I started Clue 3 last Sunday and did some quick maths. A bit too quick – I thought, I can get through this 154 row clue easily if I do 30 rows a night. I should be done in about 5 nights. Wrong! The 154 rows was for one side only, giving me a total of 308 rows. Here’s the correct math: 134 sts x 154 rows x 2 sides = 41,272 stitches. Granted, we do end up with less stitches but ballpark is still approximately 40,000 stitches. I know that Marina from the Pineapple Yarns podcast has worked out the same maths.

30 rows a day is quite labour intensive and still won’t get me through Clue 3 this week but, due to being housebound, I’ve managed to get the first side done. That will probably change so I’m resigned to being a later finisher – and I am by no means alone. It is an easy clue as far as technique is concerned but there’s so very much of it. This KAL will be finished when it’s finished! I am particularly loving the colour combination on this Clue.

My Elton cardigan is growing nicely. I’ve finally put it into a non-zipper bag – yes, it’s a Little Finch bag, more info on that in the sewing section below. No more catching the mohair/silk yarn in the zipper – I’m so lucky I haven’t actually had to cut the yarn, but it’s still very annoying and tricky to remove. As part of the Joji Locatelli Fall KAL, I need to get this finished by 30 November. I thought I had heaps of time but now it seems to have evaporated. I estimate the time needed for finishing the body is one week then 2 weeks for sleeves. If I can manage that, I’ll get it done. I only have just over an inch to go before the bottom band on the body. I’m thinking of keeping the sleeves three-quarter length as per the pattern though that’s normally not my preference. 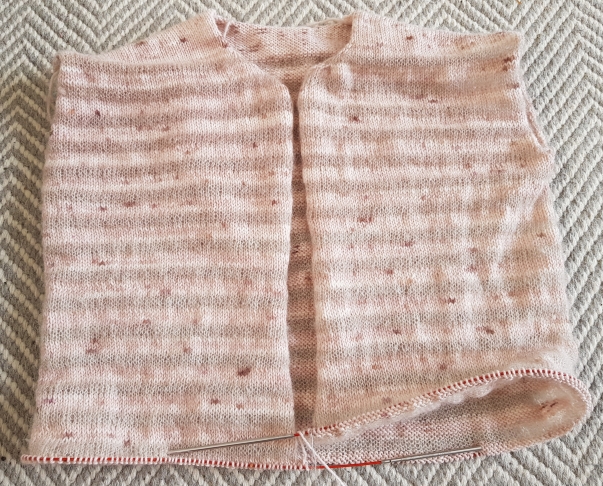 I also changed the needles. I was using the Knit Pro Karbonz (shown below) but they are not very good for mohair. Where the black bits join onto the silver bits caused a lot of catching while trying to move the yarn onto the needle. I ended up changing to ChiaoGoos which were perfectly smooth and I was also able to change in the cable from the Floozy (now onto sleeves, below) which is a great length for trying on cardigans. It meant I was able to finally try this one on and it fits perfectly.

I have started on the sleeves on my Floozy cardigan. Getting onto this proved to be a challenge as I wanted to do both sleeves at the same time and still alternate skeins. I halved each of the skeins and now I have two attached to each sleeve. Also, as I’m alternating skeins, I thought it would be great to do it via helix (or helicle ?) knitting. Whatever it is called it creates a jogless join. I used Grace O’Neill’s (Babbles Travelling Yarns Podcast) method. Hers appears the be the easiest to follow. So, to summarise, I am doing sleeves, two at a time with two balls each whilst helix knitting and, yes, it is working! I was a little scared to proceed with it and almost decided on one sleeve at a time but I’m really happy I went with it anyway.

The Cerisara cardigan has been languishing a bit. It was in the “difficult time out” corner but I have managed to make a move on it. I’m using ChaiGoo 12 inch circulars and they aren’t too bad. I’m still getting used to them.

And I even managed several rows on my socks. This project is perfect for hairdresser knitting. I need about another 2 inches before starting the cuff ribbing. You can just see the red line of waste yarn for the afterthought heels. I like to use the Knit Girllls tutorial for this as it’s really easy to follow. 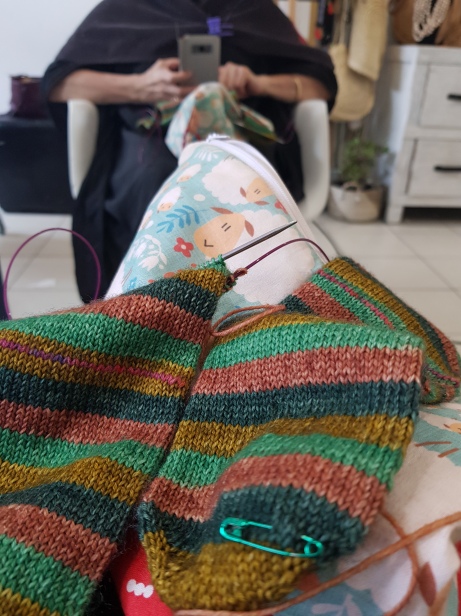 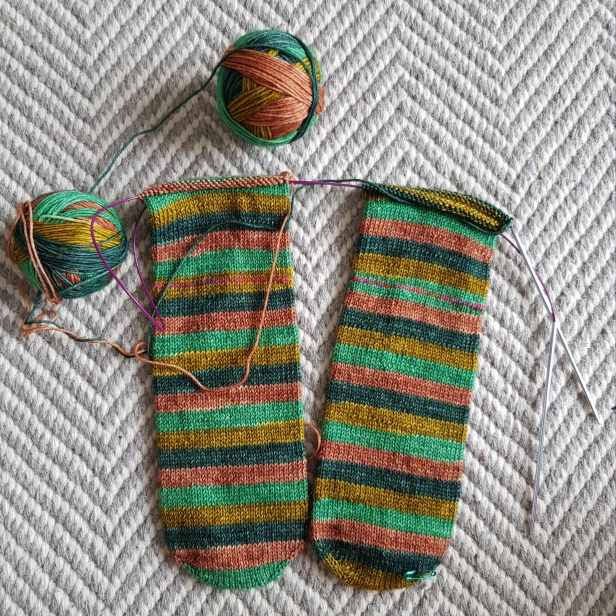 Finished Object #1: The Baby Angel top is now finished. On my first morning of recuperation, this was about all I could manage when I was not sleeping. There was only the one side left to do and it is such a tiny garment. I don’t imagine this project requires. blocking. Aren’t the buttons cute? I found these at Spotlight when I called in for something else. It’s really hard to show the right colour of the purple here – it looks considerably  darker in real life.

Finished Object #2: I picked up my Strange Brew Cowl again and there were only about 20 rows to go. I went full steam ahead and reached the top ribbing when I realised there was something wrong with the pattern. Not feeling well, I was in the “ah, nobody will notice mood” and put it down for a little time out. I really couldn’t face unwinding 3 different colours and then picking up the stitches. Those that know me could have predicted that I then decided I couldn’t live with the mistake and did rip back that section. It wasn’t so bad to pick up and I only had an issue with about 3 or 4 stitches which I managed to resolve.

So, on I went on my merry way and halfway through the ribbing I realised I should have gone down in needle size for that bit. This time I can live with it. For a start, I don’t have the pattern anymore and don’t know what size it should have been and that part of the cowl would be best on the bottom where it should probably go a little wider. I also cast off using Jeny’s Surprisingly Stretchy Bind-off. I think my floats look pretty good! Next step is a colourwork jumper. The issue of not having the pattern anymore is quite real. The Strange Brew pattern had simple hat and cowl recipes to use as a swatch before making one of the jumpers. The pattern is now really comprehensive with “recipes” for either top down or bottom up colourwork jumpers in sizes ranging from baby to 4XL and in sock, DK and aran weights. It’s amazing! But, I had planned on making a matching hat for me and maybe a baby hat for my granddaughter to match. This part of the pattern is no longer there – I’ll have to search my downloads to see if I have an old version somewhere. 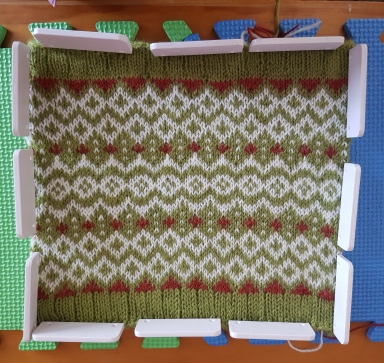 All that is on my hook and actually in live rotation at the moment is the Inka the Little Llama security blanket. It’s coming along nicely though I did have to rip back the first cream row, having forgotten that it needs to be crocheted through the back loop only. Lucky crochet is quick and easy to rip back for mistakes. I only have about 5 rounds left now to do before I start on the Llama itself. 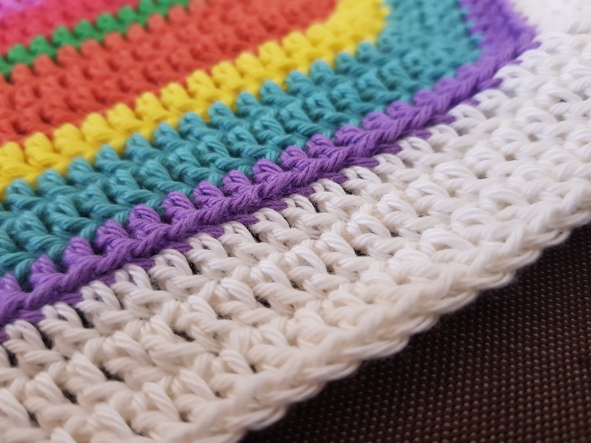 I got some sewing time this week! Yay! The 9 Little Finch Buckets only had to be sewn together and turned right side out. That took no time to do and then I only had to close the lining gap, iron and top stitch around the top section under the cord casings. Unfortunately, I don’t have enough cording to put into all of them. Our local Spotlight store doesn’t stock a very big range of cording – nothing like it used to do. There used to be a huge range and now the cording and tapes all sit in one small section. Three of the bags were lucky enough to have cording added and I’ve already started using 2 of them. Thank goodness for eBay, where I’ve ordered the rest of the cording. 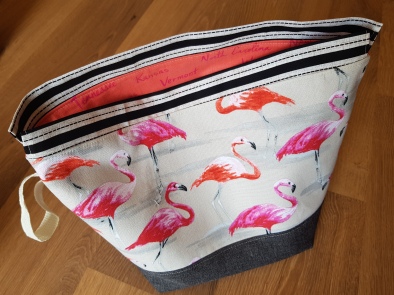 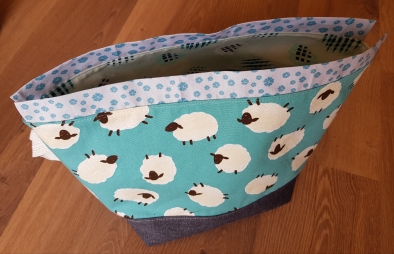 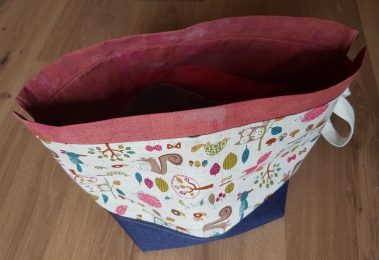 I finally managed a little bit of stitching on my Round the Garden this week. The five flowers I’d started a few weeks ago are done and should only have taken an hour to do, not several weeks. 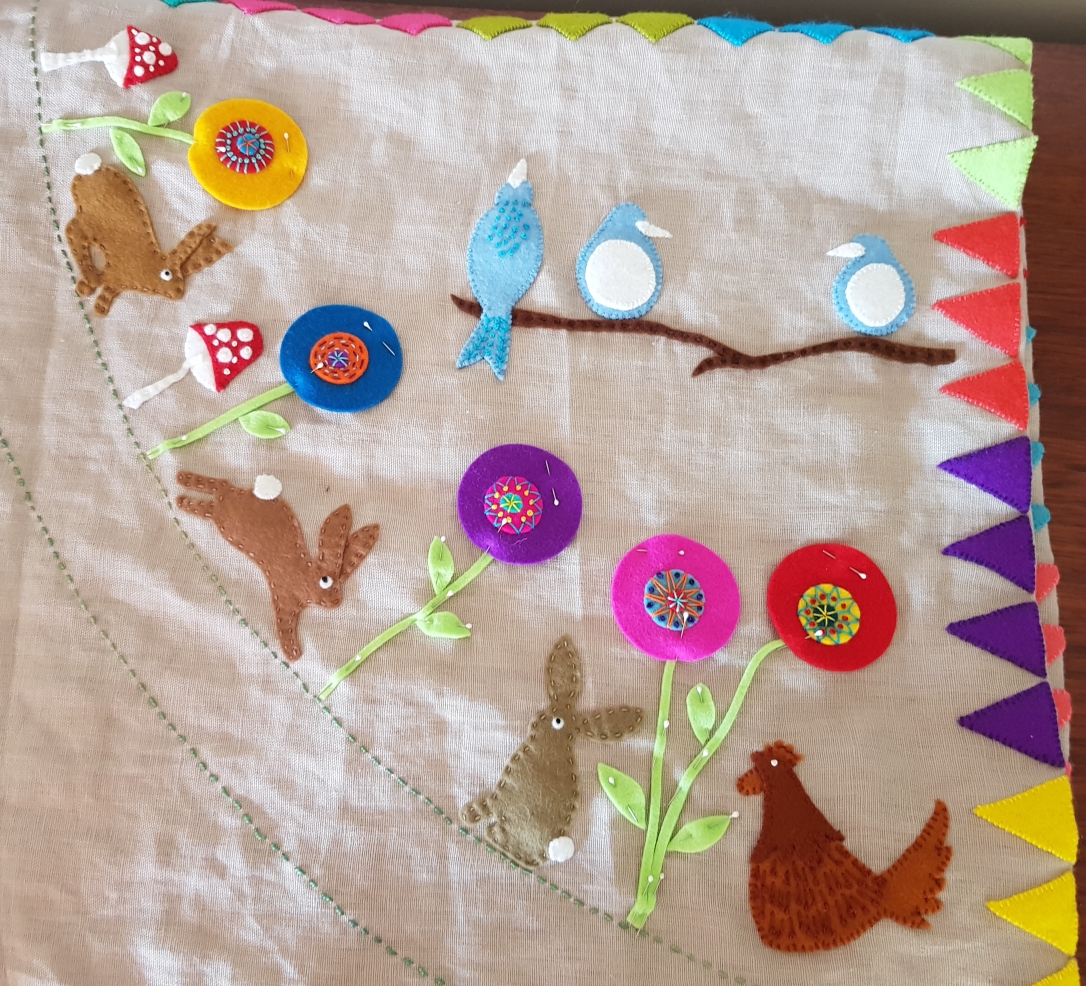 I took up my son’s wedding suit pants yesterday and, though it qualifies as stitching, it is definitely not an obsession. These were needed for The Wedding. It’s a skill that comes in very handy but certainly doesn’t rate on the “fun-to-do” scale. I was actually going to take a photo of the process but I was very distracted by my 3-week old granddaughter. It was hard enough to focus on the job at hand.

For my Elton cardigan, I’ve decided I may do the sleeves separately. My justification for this is that the 4 row repeats on the alternating fingering/mohair yarns will make it easy for me to ensure they are exactly the same. In order to do this, I called in at Sew and Tell in Berry on my way to Sydney an purchased a pair of 4 inch 3.50mm Knit Pro Nova needles and 40cm cable. My ChiaoGoo Twist Minis only go up to 3.25mm otherwise they’d be perfect as they are only 3 inches long. I do have some ChaioGoo 4 inch options but not sure the little tiny cables will fit.

This week I finally had to relinquish my old notions pouch, gifted by a lovely friend many years ago, as it has been overused and has come to the end of its useful life. Another friend of mine recently gifted me a wonderful notions pouch with three zippers – I love the multiple zipper option which was also a feature of my original pouch. She had picked this one up from China last year and it seems to be perfect. I’ve added a couple more bits so I’m already stretching the capacity somewhat!

The week ahead is going to be exciting. I’m now in Sydney again, where I will stay until next weekend which will be after The Wedding happening on Friday. I have a car full of clothes and knitting/crochet/stitching projects and many activities planned, starting with lunch at Ripples at Chowder Bay today. I have remembered to bring the lovely wedding pack that my daughter gave me when she gifted her bridesmaids a similar pack. I’m counting myself as one of her “unofficial” bridesmaids as I’ll be the first one down the aisle as the “official” cue. The pack shows an individual Moet Champagne and my wedding preparations dressing gown. 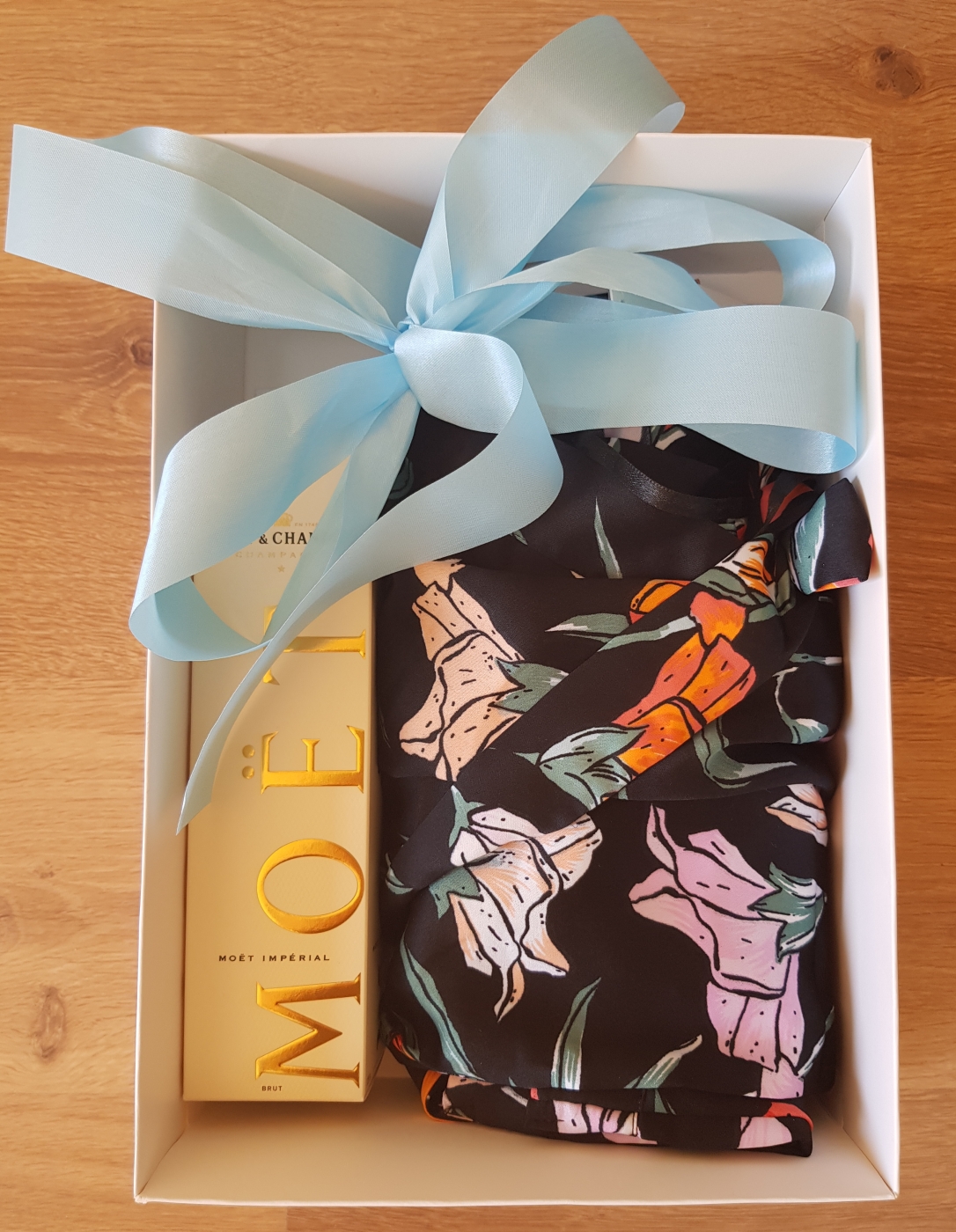 As this is a week of celebrations, my intention is for a celebratory cast-on and I’ve selected my Katia Brisa summer top. The Brisa yarn consists of 60% cotton/40% viscose and is really shiny. I studied the pattern this week and did some calculations for conversion to knitting in the round. The calculations were good but I forgot about the intarsia section where there is both navy and white in the same row. That is not possible to do in the round as the yarn is at the other end when you get back to that section. I’ve resigned myself to the fact that will be knitting in pieces and joined. I think I’ll do a Kitchener bind off for the shoulders and then seam the sides. I may also decrease more stitches on the sleeve side of the armscye  (armhole) as that is a more flattering style for me.

It’s time for me to close this long and rambling post! Until next week, may you have lots of opportunities for your creative pleasures!