Welcome to my little corner of the internet! It seems that I finish one blog post and it’s time to do the next. That’s what happens with the working week and I’m pleased to announce that my last working day will be on the 1st of August, only 53 days away. That’s only 37 more days I have to work. Yes, I am counting. You can see my countdown calendar below – I have it up in the entrance of one of my craft rooms. I am looking forward to a lot of “me” time, with more time for loved ones and friends. It’s unfortunate that the last work days will be across winter, with the icy problems as shown below. This week’s ice took a lot more to get off and I’ll probably have to do it every week now. I only have a couple of kilometres to drive but maybe the visibility could/should have been a little better? The last photo shows a very small section of my messy table at home, and that needs attention today. At least I know exactly where everything is – all in the same place. This weekend we have our Queen’s birthday public holiday on Monday. The current monarch enjoys her birthday in April but New South Wales has kept the June tradition from one of the old kings instead. 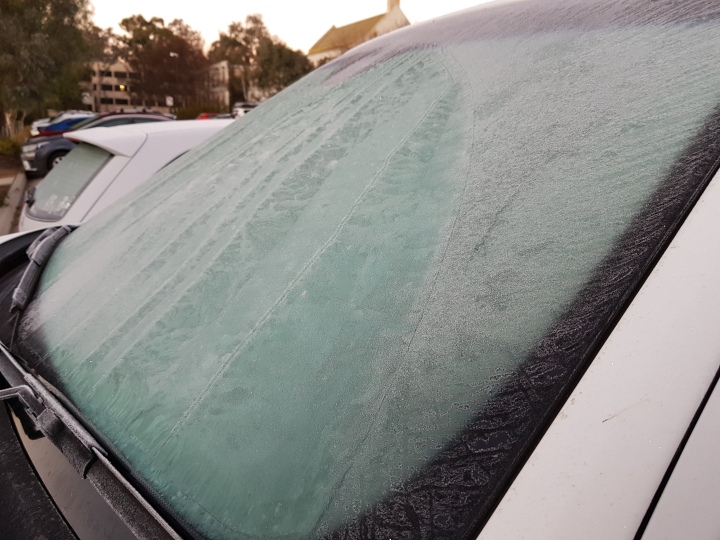 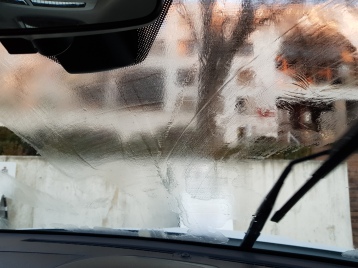 Yesterday was Worldwide Knit and Crochet in Public (WWKIP) Day and I joined in with the Nowra Spinners and Weavers at the Nowra Library. It was a good turn-up with several ladies bringing their spinning wheels. A few people stopped by to see what we were doing so it was definitely worthwhile. I didn’t attend last year but I know it was held outside, in the shopping centre area. That may be a good idea for the northern hemisphere but last year’s event was held in bitter windy weather. The library was very public and nice and toasty. I even got to wear my Feather and Fern for the first time. 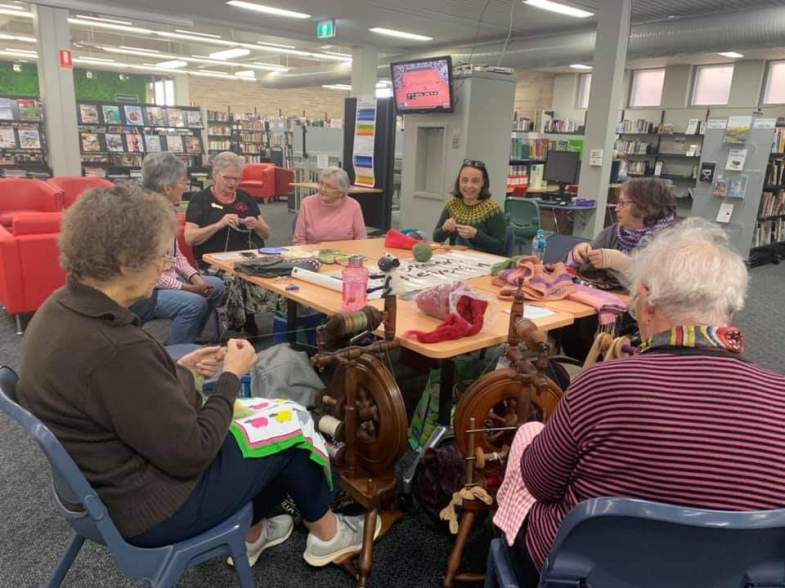 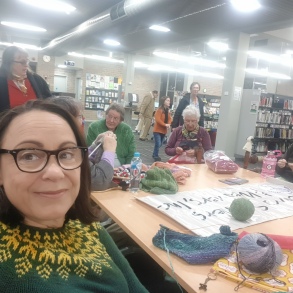 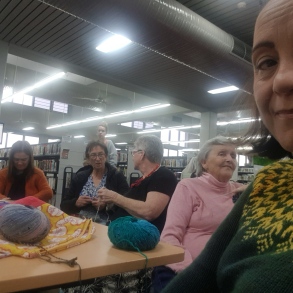 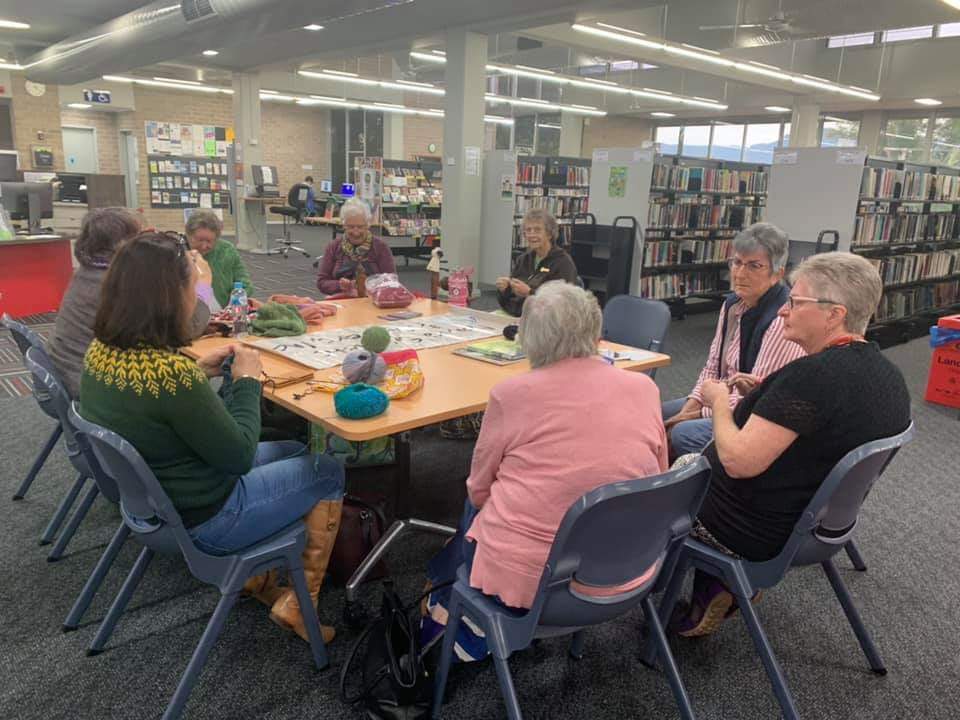 I’m currently working through the last episode of my You Win or You Die (Game of Thrones) KAL Leftovers Cowl. I had hoped to have this finished by today but I decided, for the last episode, I would do full colourwork patterns for each of the characters. Spoiler alert – you can see there was only one death in this episode. Anyway, I only have about three more of these sections before I reach the end so it will definitely be finished for next week’s blog. 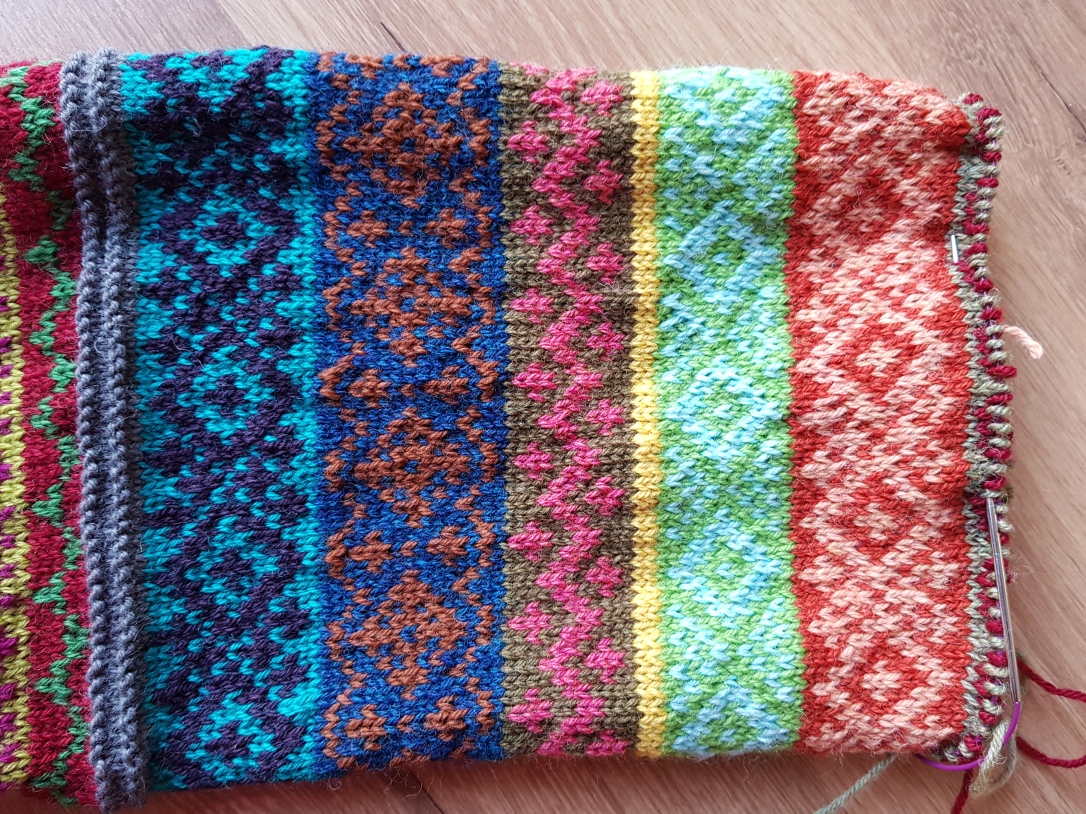 The Bell Sleeved top is coming along nicely now with the sleeves down to the purl section before the bell sleeved part begins. I will try it on today, to make sure, and continue on hoping to have this to wear soon. Maybe for the Sydney Quilt Show or Fiberex Event coming up in two weeks. Hmmm, that could be a good incentive.

The Blaise shawl is on the downhill run. I haven’t given it too much love this week but a little at a time will see it finished soon enough.

New cast on 1: Yes, that heading does tend to indicate that there is more than one – I did finish three projects last week. A couple of weeks ago I showed my finished Lanesplitter skirt and discussed how I had wanted it a bit shorter. Well, last week I cast on another one. I counted how many fewer repeats I needed to do up the side of the skirt for the length I’m after and I’ve now turned the corner to the straight part for the long rectangle. As I did last time, I thought this section looked quite short but, knowing how much I need now, I have gone with it. The first one didn’t take very long so this one should take even less time. The only difference so far is that I’ve swapped the colours A & B. The garter ridges on this one is the turquoise/red Noro yarn and the stockinette part is the grey/black.

New cast on 2: I mentioned last week that I wanted to cast on a new project for Evie and I’d ordered some yarn from Bendigo Wools to get it quickly. Unfortunately, the sale they had meant they were overwhelmed with orders so I am still waiting for it, the delivery only having commenced on Thursday. So, in the meantime, I had wanted to use some yarns that I had in my stash (very deep stash) and decided to start a Strange Brew sweater for Evie – something I’ve wanted to do anyway. I had the beautiful orange/rust Cleckheaton Country Naturals 8 ply and the Shepherd Colour4Me Prints 8 ply but decided that the main yarn I had wouldn’t do. I found the oatmeal in the Country Naturals at Spotlight the other day – the Canberra one because the Nowra one has very limited stock. I cast this on Friday night and started the colourwork yesterday before I headed over to the WWKIP day.

New cast on 3: This one was a totally random cast-on. I’d been watching the hype on the internet for the My Boy Lollipop sweater by Nancy Ricci on the internet and was not very interested. Until I saw some of the finished projects. The fact that it only uses two balls of DK got me thinking about the two skeins of Wren & Ollie Spin DK that I had purchased last year from Skein Sisters in Sydney. The sweater has a short cap sleeved and is cropped, hence why it uses so little yarn. I figured this would be a perfect project for the Wren & Ollie and would be a quick finish. There’s nothing like a couple of quick projects when slogging through some of the large sweaters. The yarn is 100% superwash merino and I’m in love with the speckle detail. The speckles are so crisp – something I’m trying to perfect, with only little success so far. My favourite colour is a variety of teal and turquoise and this is turning out with a majority of those colours so I’m loving the fabric I’m getting. I’m using the helical method as the skeins had different saturations of white once balled up, as you can tell from the photo below. The alternating was a little confusing in the seed stitch neck border but it’s a disruptive pattern so is totally unnoticeable. 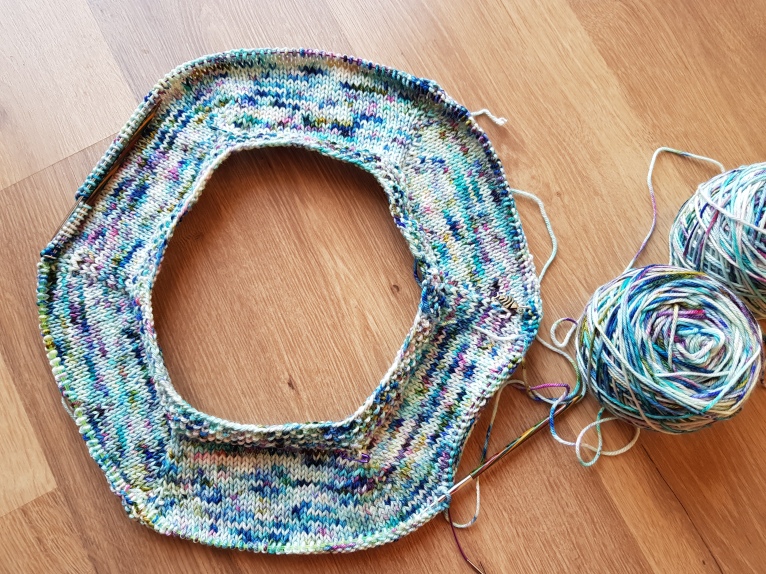 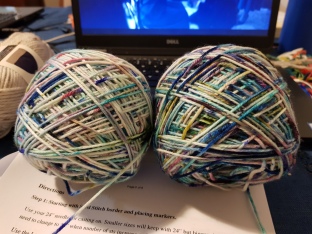 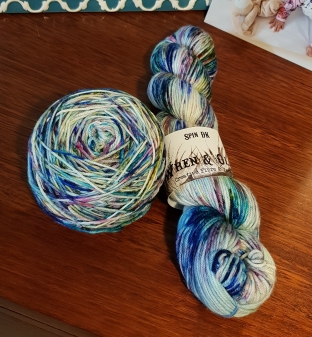 A couple of weeks ago, I’d purchased a remnant of some blush pink scuba suede. I think I may have mentioned it as it’s a new to me fabric. The remnant was 47cm of 150cm wide fabric so I thought I’d be able to use it for a short (above the knee is short enough for me) skirt. This week I stumbled on the Mabel skirt pattern by Colette Designs which I thought would be perfect. It’s an easy sew, with no zippers or buttons, relying on the stretch of the fabric instead. I cut it out yesterday and hope to sew it together today. I have a few patterns cut out and ready to sew. I’ve just been waiting for the opportunity when I’m near my machine. This weekend has a public holiday Monday so I may be able to spend some time sewing. I’m doing version 3 which is a longer pencil-type skirt with a kick pleat and I adjusted the length of the pattern so that it uses the total length of the fabric. I was a little concerned but I even managed to eke out the waistband pieces – I had thought I may need to buy a small piece to cut those. I think the remnant only cost me $4.50 so, if it works out, it will certainly be value for money! 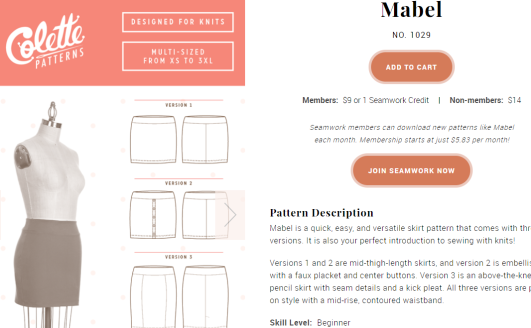 I have been looking at patterns again, mostly inspired (or enabled?) by Instagram. The Suzy dress by Athina Kakou is another one of her easy patterns, similar to the Sheona dresses I’ve made. The Instagram pic on the right below inspired me to get the Adrienne blouse pattern by the Friday Pattern Company. Another easy pattern I’m itching to put together. I tried to get these printed on A0 on Friday afternoon but it seems I may have broken the Officeworks printer! Just kidding, but it wouldn’t print them and they’ve had to call for a mechanic. The usual lady wasn’t there and I’m not sure they knew what was going on. I think I’ll try again in Canberra this week and hope they don’t have the same problem. Probably a good thing I didn’t get the patterns as I should probably work on those projects already cut out. 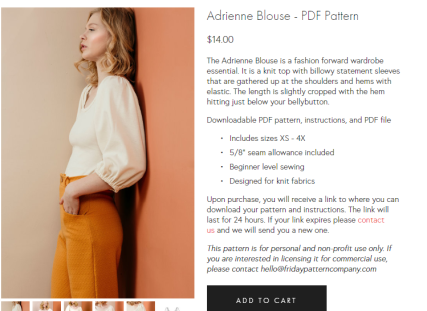 After a couple of visits to Spotlight this week, I now have some more fabric and patterns. The first trip was to get the Vogue V9075 and I also picked up some lovely teal and gold rayon and some knit rayon with a pale blue/teal and brown. This knit rayon should be good for the Adrienne blouse. It’s not exactly what I was looking for but should be a good wearable toile until I find the right fabric. The next trip was to buy some ballpoint machine needles and I found a couple of remnants and a 3 for $15 pattern offer. Two of the patterns are for some Evie outfits and the other, Simplicity 8551) may be perfect for the teal/gold rayon from the previous purchase. I got a lovely microfleece with bugs for Evie and a 1m piece of rayon I’ll use for something, I’m sure. 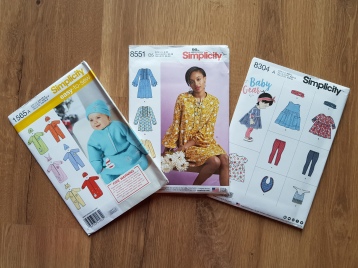 This week’s most exciting of my various digital entertainments was the release of Season three of the Handmaid’s Tale. Three episodes were released and I’m impressed at how they’ve managed to keep up the excitement in this new season. I will confess to crying through a fair amount of episode 1. I can’t wait for some more episodes, though I’m not sure of the frequency of how they are releasing them. Maybe three a week? That would be much better than one a week.

I’ve started a new audiobook, The Retreat by Mark Edwards. I think I’ll enjoy it, though I’ve barely just started it. I’ve also downloaded Death in a Strange Country by Donna Leon and The Binding by Bridget Collins which are the books for the next Book Club session in August. I’m looking forward to that as I’ll be a regular in the Book Club group again. I’ve been catching up on my audio podcasts on my drives, this week to Canberra and back, and also to Wollongong and back. I’m nearly caught up with them and will be happy when I only have that week’s episodes to listen to.

Thank you for joining me while I tell you about all my makes and what’s happening in my life – I hope you enjoy it as much as I enjoy putting it together. I know I will certainly enjoy my extra day at home tomorrow. Until next week, I hope you have lots of opportunities for your creative pleasures!