Hello friends! This week has been a little crazy and just a bit exhausting. After returning home from Sydney on Sunday, I headed up to Wollongong on Tuesday to mind Evie for two days and on Wednesday I drove back to Sydney and brought my Mum and Dad home for a couple of days on Thursday. Yesterday I drove them to Kiama to catch the train back to Sydney. So, since I blogged last, I’ve had eleven hours of driving! I’m always amazed at the cloud formations that we see from our deck. And the smoke haze coming from either north or south – this one was from the fires south of us, coming up with a southerly front. 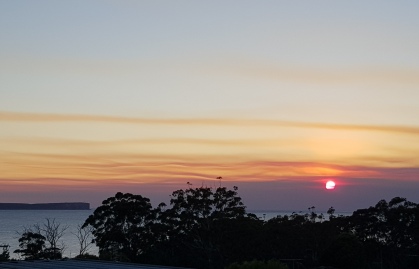 Sunday’s lunch with my school friends was very enjoyable at the Hello Auntie Vietnamese restaurant in the new Darling Square. This is the area at the western end of Darling Harbour and it’s been done up very nicely as an eatery and park area. Lunch was followed by ice cream at the new Messina there. It was a toss-up between Bangin’ on Peter’s Drum and Jon Snow – Jon Snow won and it was delicious! This area and the city is a handy bus trip from my parent’s place. I noticed the new tram system was testing – I don’t think it was operating yet but there were people waiting for it! How pretty is the colourful hanging display that was in the circular building – we nearly didn’t see it because it’s way up over our heads. 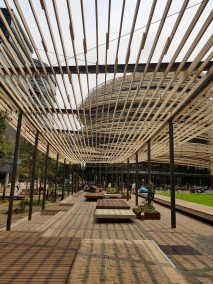 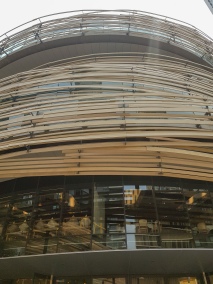 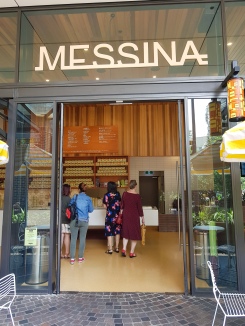 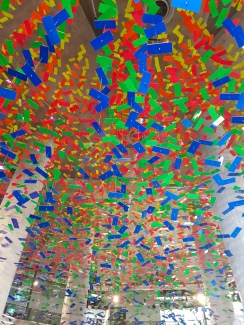 Tuesday and Wednesday was quality time with Miss Evie. She is such a happy little girl! We had our usual walks and did some shopping, but it was very hot! I think we may need to go have a splash at the beach instead next time. 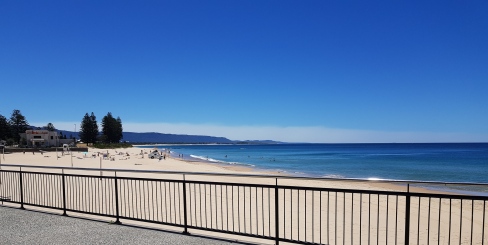 On Thursday morning, I went for a run/walk around the inner circle at Centennial Park, as I like to do when I’m staying there. It’s a beautiful park and I even saw some majestic black swans pecking around in the grass. 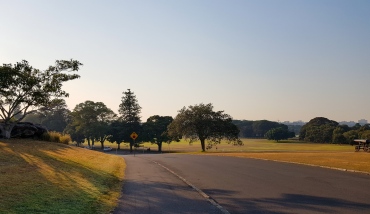 On Friday, I got on my bike for a ride out to Woollamia boat ramp to check out the pelicans. There was one resting very close by. We stopped for a coffee on the way through Huskisson and witnessed a car chase through the main street. The car was being chased by two police cars with their sirens blaring. This is something you don’t see in Huskisson! It’s quite busy at the moment with tourists and Julie and I had just ridden our bikes along that very section. 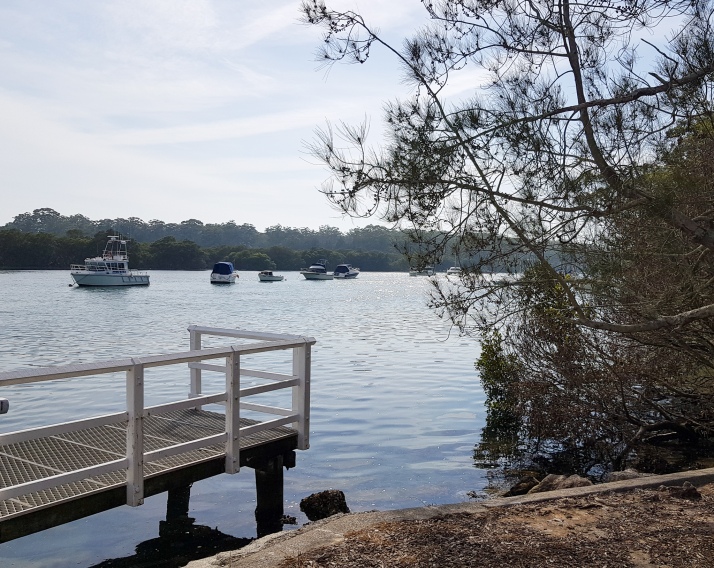 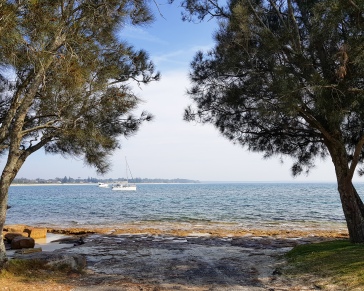 This week has been all about advent knitting and there has been a lot less time for knitting at all due to the time spent on the road. I have been opening my Willow and the Wisp chakra advent pack each day and I’ve managed to keep up with knitting the minis – so far! There are 25 x 10g minis in this pack. I had shown the first mini cake last week but I’ve included it here to show with what was knitted. I’m knitting the Outline wrap by Beata Jezek – mine is probably smaller – large scarf, perhaps? It should block out to a decent size and that will also even out the bumpy-ness that you see in the pics. 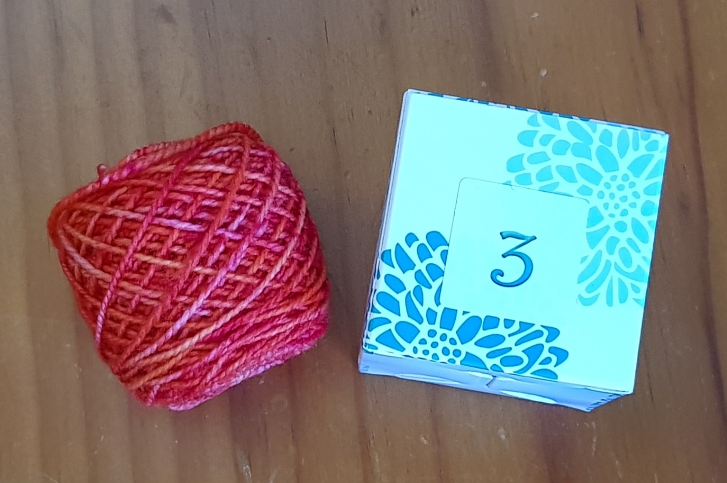 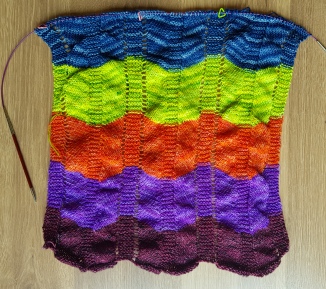 My other advent is the one I dyed for myself and my friend Mary. I have been pretty good at keeping up with this one but have slowed down now. The pattern I’m using is the Olilia shawl, a free pattern on Ravelry. This one only has 12 minis but they are 20g each. I had originally thought to do one mini every second day but because I will be using the remainders at the end I thought I could do each day as I can manage – the first few were quite quick. I have done to the end of day 6 here and show the minis for days 7 and 8. Number 5 mini was almost all used up as the shawl has grown exponentially.  So now, to use numbers 7, 9 and 11, I’ll need to reduce the numbers of short rows for numbers 8, 10 and 12. There are 6 short rows in each repeat so if I reduce the next one to 5 sets of short rows I would be saving two full rows of the main colours. That should be enough to cover the 50 stitches increased in the fourth repeat, as well as the fifth repeat and likely for the final repeat – if not, I’ll go down to 4 sets of short rows. That may actually look good as it gets a little shorter each time. I’ll see how it looks when I get there. For the border, I’ll use up all the remaining yarn in order backwards. That is just straight knitting, continuing with the increases, so it will be alternating main colours with speckled colours. 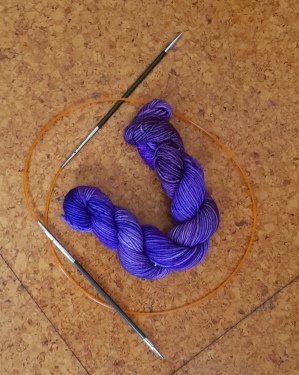 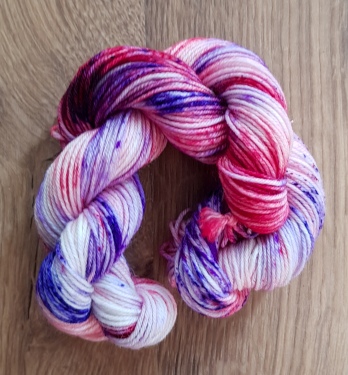 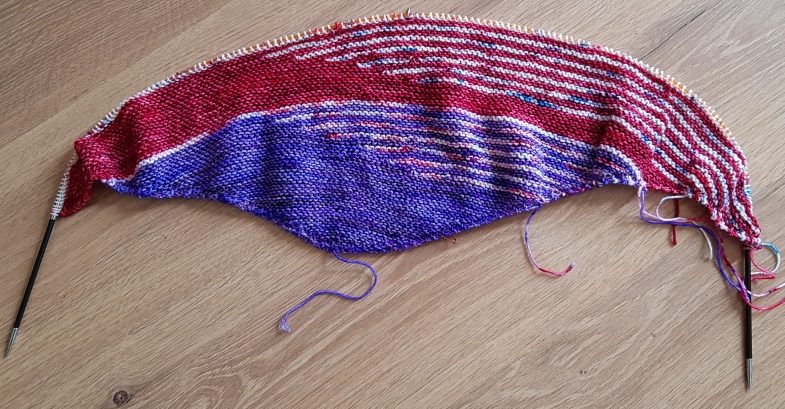 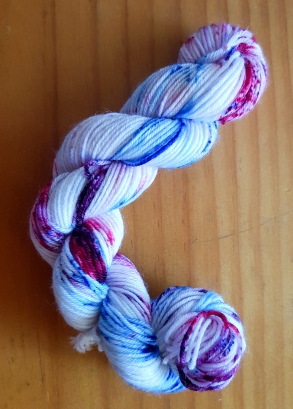 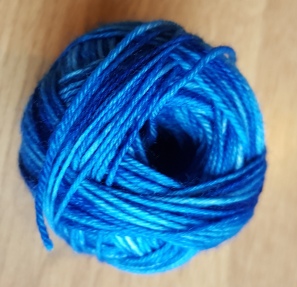 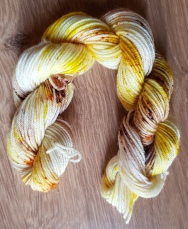 There is no other knitting to show this week. I’m missing all my current WIPs while staying up to date with these advents but I’m always loyal to keeping to my arbitrary challenges! The Olilia advent should slow down at some point and I’ll then gladly take up my WIPs again. I did learn a great way to hand-wind yarn from a YouTube tutorial by Alex Collins. I really enjoyed it and I love the way it turns out – you can see the ones that I did in my Olilia shawl pics above. I don’t know if I’d like to do a whole 100g skein that way but I’ll do the rest of my minis like this.

Sadly, the yarn on this bobbin on my wheel has been the sum total of my spinning for maybe the last two weeks! I think I’ll have some time for it this week and I’m looking forward to it. This fibre is actually from my spindle spin but I’ve really not felt like using the spindle lately. When my drive cable snapped the other week and I rejoined it, I wanted to test the wheel and I decided that I would get the resultant yarn much more quickly if I finished off this spin on the wheel. With any luck, I’ll have this spun up this week and ready to ply with the first bobbin which was all done on the spindle. 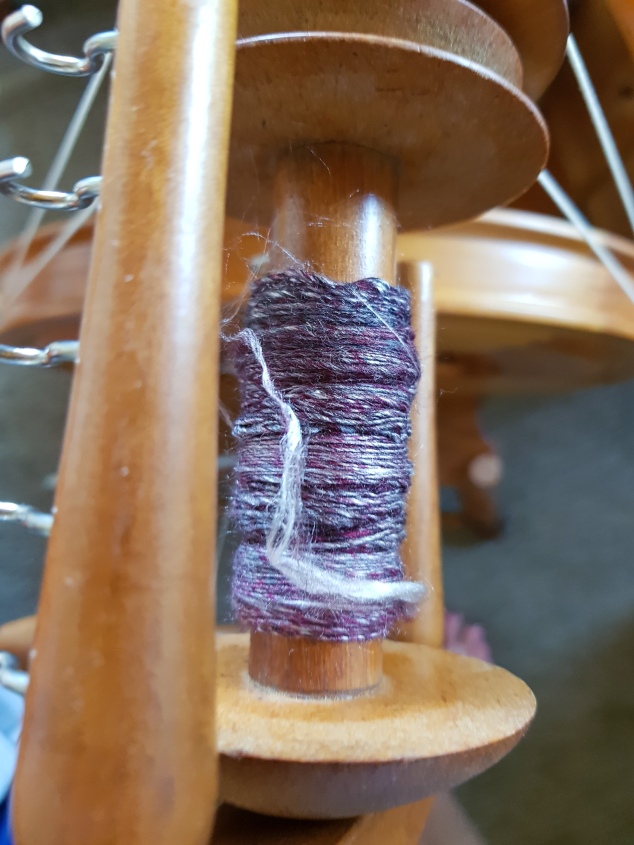 I have started putting together the Geranium dress that I cut out for Evie. This is such an easy make and should be very quick but I’ve had little time at the machine. The bodice is complete and I just now need to add the skirt – may be able to see the pleats that are pinned. Then I add the buttons and do the hem and it’s complete. This will be finished this week and I’ll get onto sewing up the size 3 Racerback dress I have cut out. 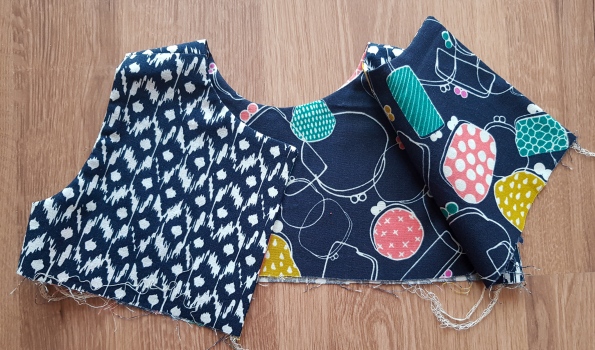 I’m now putting together the Christmas stocking for Evie. I had cut this out last year and did not manage to get it finished. I have stockings for everyone else in the immediate family that I made a long time ago, adding to that with spouse stockings. For each, I have used a panel and quilted the front picture and embroidered the name. This one is actually a snowman with presents. I only just noticed with this picture that I’m not actually using the walking foot! I just have to quilt the plain red backing and will then bind the two side together. I normally make binding from the backing but, as I cut this last year, I made not be able to find the fabric in order to do that. I have already packed up some of my fabrics for the move into storage while the house is built. If I don’t find the fabric, I’ll get some bias tape in red and use that instead.

I finished my third and final advent on Monday and gifted it on Tuesday. It was day three but it just meant that an extra two had to be opened. That was enjoyed at the time.

Because of the large quantity of drive time I’ve made a huge dent listening to my new audible book – No Time for Goodbye by Linwood Barclay. I don’t think it would win any major prizes but it’s such a riveting read! I hope to finish it today. I have another of his books but may go onto one of the other dozen or two that I have waiting, or maybe not. I’ve also not had much time for watching any shows on Netflix or ABC iView as I’ve been inundated by Vlogmas on YouTube. As happened last year, there are far too many podcasters that I follow to be able to watch all their Vlogmases so I picked a few favourites and I’m watching those. I also prefer the short ones as most are uploaded daily. These are all in the northern hemisphere so it’s lovely seeing the snow and beautiful lights. I’m afraid a summer Christmas doesn’t seem anywhere near as festive in comparison.

Well, I’m about to get knitting on mini cake number 8 on my Outline wrap so I’d better wrap up here! This week’s blog is a bit low on crafting content but I’ll remedy that for next week. I have some festive events starting this week and I’m looking forward to them, with almost zero driving. I hope you are enjoying the lead up to the festive season, whatever you celebrate, and, until next week, I hope you have lots of opportunities for your creative pleasures!