Hello friends! ‘Tis the season….. and it’s been getting quite jolly around here. And preparation for the big pack up has started. Last Sunday we managed to give away our old piano. It had been a great piano for our daughter when she was learning but wasn’t needed anymore. It was quite an adventure getting the beast out of the house – the recipient’s collectors were amazed at the weight of a simple upright piano. Apparently, they have plates of steel in them. Apart from that, little else has been done as I need to get my hands on some boxes. Hopefully this week! We now have 8 weeks left to empty the house before the demolition starts. 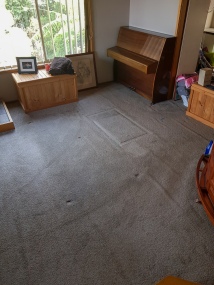 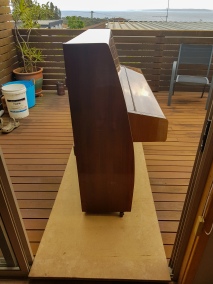 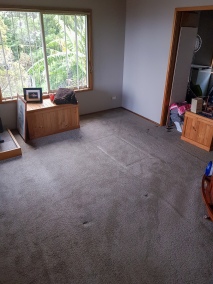 The week started with a bike ride to our breakfast catch-up, a hair cut and some Christmas shopping. Tuesday night was Book Club Christmas Edition with some fine food. On Wednesday, we had a Christmas Sewing Day at my friend, Narelle’s place. 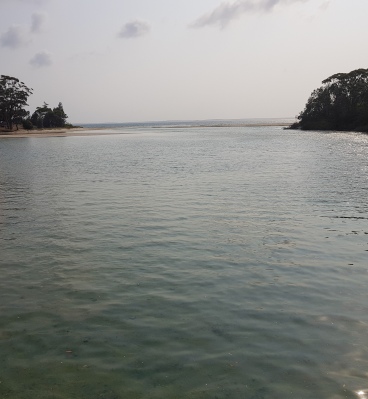 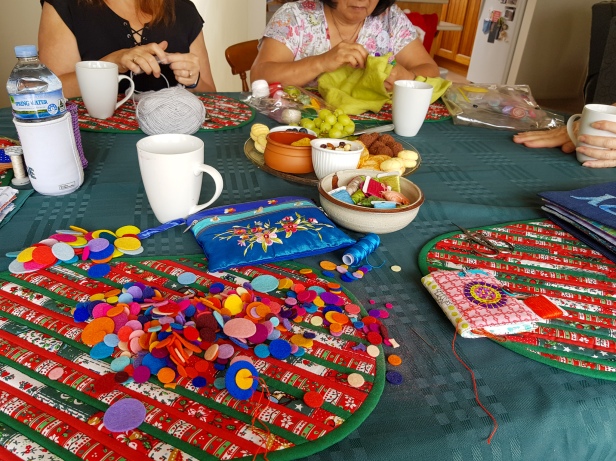 Friday started with a paint pouring session at my friend, Carol’s, place and was followed by a pleasant evening celebrating our husbands’ golf year at their annual group Christmas dinner. This year we went to the Kanpai Japanese Restaurant. On Saturday night, we caught up with friends visiting from Sydney at the 3 Gringos Mexican Restaurant. So much celebrating, so little time! The Christmas decorations are popping up around the area – I’ll have to go for a drive one evening just to check them out. 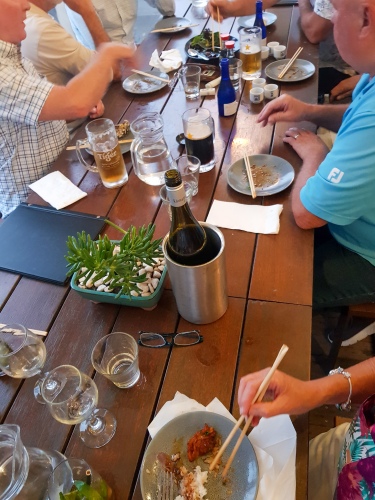 This week has been another one without my regular knitting. I’m hoping that the regular program can be resumed soon! The Outline scarf continues each day but, as of today, I’m 2 days behind in my Willow and the Wisp advent. I’m working on 13, next is 14 – the orange and I’ve opened the box for 15. I worked out that it takes about 2 hours of knitting to get each 10 grams done so there’s little time for much else. I was a bit concerned about my choice of pattern and the colours at first but I’m now loving this project. It’s my scarf of many colours! 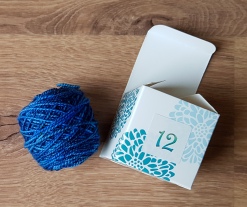 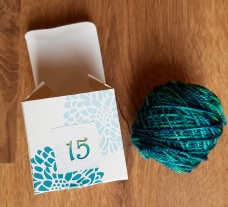 The other advent – my Olilia shawl has only had a little look in and I’m in the middle of skeins 7 & 8 of the 12-day advent that I’d dyed up myself. I was going to cut one of the short rows to reduce the main colour usage but in the end, I only did three instead of four rows (right side/wrong side) before starting the short rows. This should have the same result and leave me enough to add to the border. 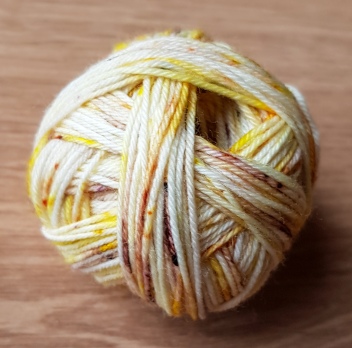 Last year, yes last year, not earlier this year, I started knitting some socks for my now son-in-law. He’s a mad Golden State Warriors fan so I dyed up some yarn – variegated in blue, yellow and white plus solid blue and solid yellow for heels, toes and cuffs. Not knowing how big to make them and when to start the heel turn, they ended up looking huge so I put them aside for a short while. Hmm, maybe a long while! Anyhow, I got them out the other day and decided to rip back to where the heel gusset started and just knit a tube with toes and heels. I got into a bit of a pickle with tangled yarn, especially since I’m doing them two at a time from one skein only. I managed to get that sorted and I’m well underway. I thought I might gift him these, if they’re done, without heels and I’ll put in the afterthought heels while he is here after Christmas, when I can see where they need to go. 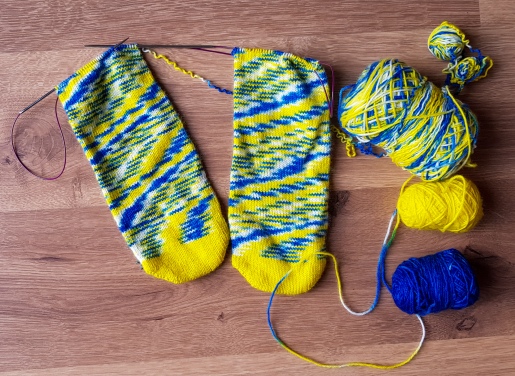 More gift knitting is happening. This is a trial run at knitting a golf club cover with a pattern using different size yarn and what looks to be a smaller head size. I managed to get the shaft cover finished quite quickly but have stalled on the head knitting. I am using 8 ply (DK) acrylic yarn and the pattern is for bulky. I did have several starts where I tried knitting the rib using two strands but it looked silly. In the end, I added a few stitches and just used a single yarn. It seems to fit over the head of my husband’s driver. I’m now increasing for the head and I was told it needed to be thicker so I’ll add that second strand and a larger needle. I also want to add some white and it was suggested to do a “D” for “driver” so I’ll see how that works. It will all be finished with a pom-pom on top. If this prototype works I’ll do a couple more in relevant colours.

I had hoped to have had this spin finished this week but I haven’t been at the wheel very often. There’s still about an hour or so of single to spin before plying. I’ll try for next weekend.

I had cut out a Geranium dress for Miss Evie a couple of weeks ago and this week I have finished it, all but the buttons and buttonholes. I’ll need to buy some buttons, hopefully tomorrow and maybe finish it off before I head up on Tuesday. It’s a fabulous pattern and I love adding the bits of fun contrasts with the bodice lining and hem. 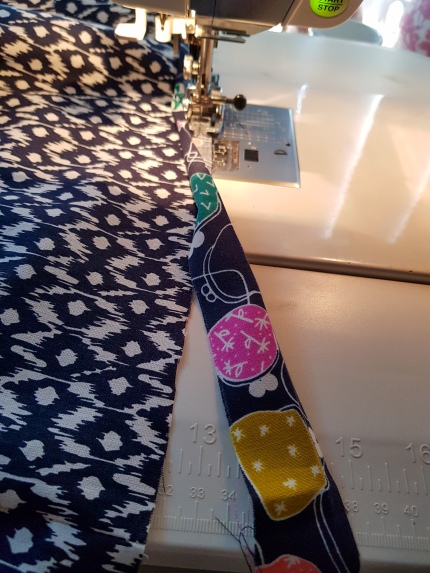 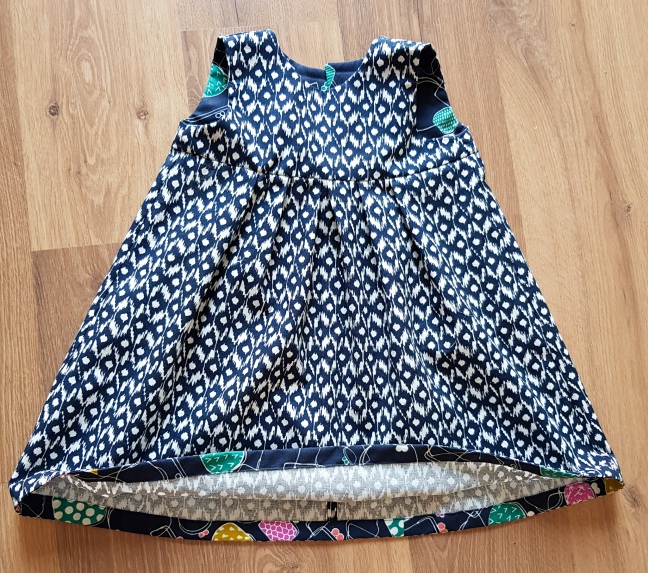 After all but two years of this Christmas tree quilt sitting and patiently waiting, I am now finishing quilting it. The paralysis was mainly on how to quilt the star border and I’ve settled on thin back and forward squiggles. I had seen this on one of the quilting Instagram photos that I follow. It’s certainly making the stars pop and maybe I didn’t need to have the squiggles so close but it looks good. I would like to have this hanging by next weekend as this is the Christmas tree for this year. I have added the binding on three sides but I’ve left the top so that I can add a rod pocket. 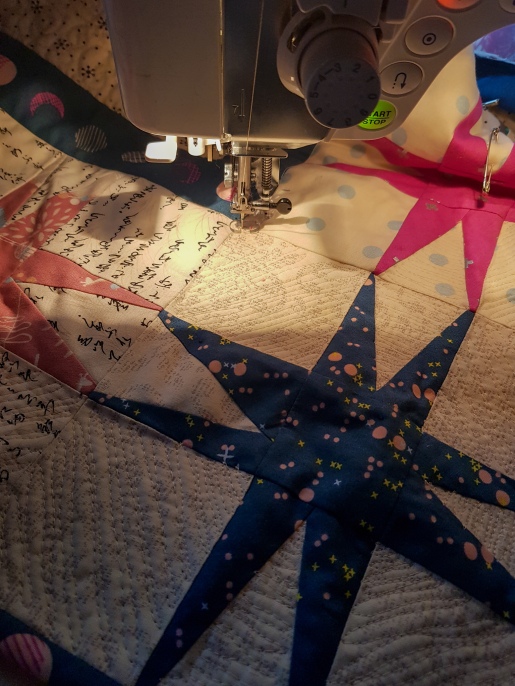 And I finished Miss Evie’s stocking. I found the fabric where I’d left the stocking pieces so I was able to make some matching bias binding. I watched the SewCanShe tutorial on how to make continuous bias binding. I had made some previously but it wasn’t continuous. When I bought the panel, I didn’t realise it was considerably bigger than the other stockings but it is only fair that the smallest person gets the biggest stocking! 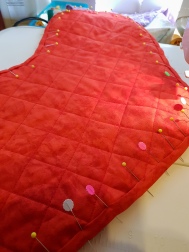 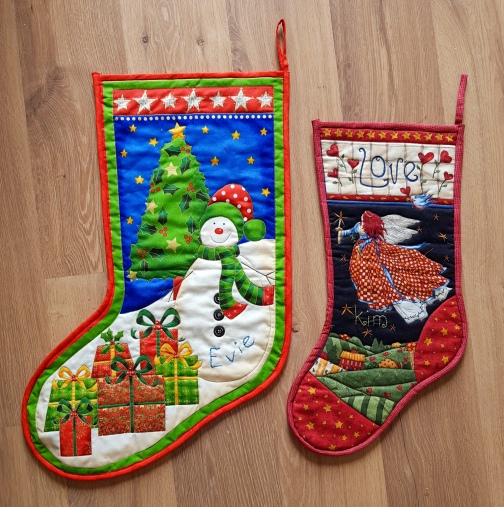 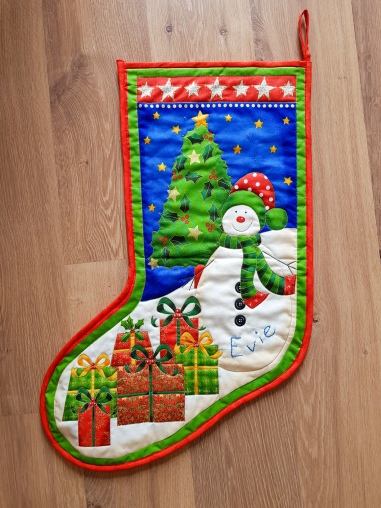 My Round the Garden quilt got some love at my Sewing Day on Wednesday. I decided to start on the flower border. I had used a friend’s CriCut machine back in August at our retreat to cut lots and lots of little circles. I thought the amount I cut would be enough but it’s going to take more cutting out of circles to get all the way around the quilt!

On Friday, my friend Carol and I got into some paint pouring a la Rinske Douna. It was a lot of fun. It seems Carol’s hairdryer isn’t strong enough and my hairdryer is too strong! My large picture looked very much like a flower so I added some green to make it look like the bud section. I’m not sure if I need to add more of a stalk to that green bit or not. I did add some more but it’s not shown in the final picture I have here. The canvas is still at Carol’s place as they can’t be moved due to the amount of wet paint on top. I also did a small canvas with leftover paint – the two pictures at the top. This is such an addictive form of painting that we want to do more. I realise that normal painting does not really interest me but this is fun and I love the results. 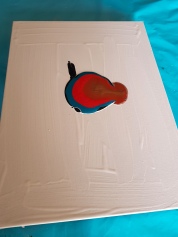 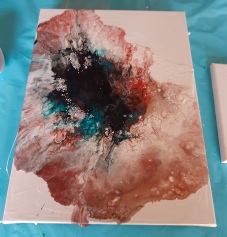 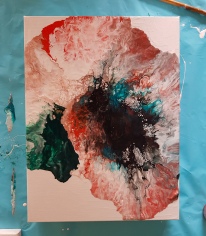 I received some happy mail this week in the form of my December Batt Club from Ixchel Yarns and Fibres! The photos do not do this batt justice and you can’t see the sparkle. It is gorgeous! This is my third and last batt of this club and I haven’t even spun up the first. The main reason is I need to decide how I’m going to spin it. I think I’ll be doing one of them very soon though.

Another visit to Spotlight, another few remnants! This week I got the following, clockwise from top left. The colours are a bit paler than in real life – they are much richer than shown here. 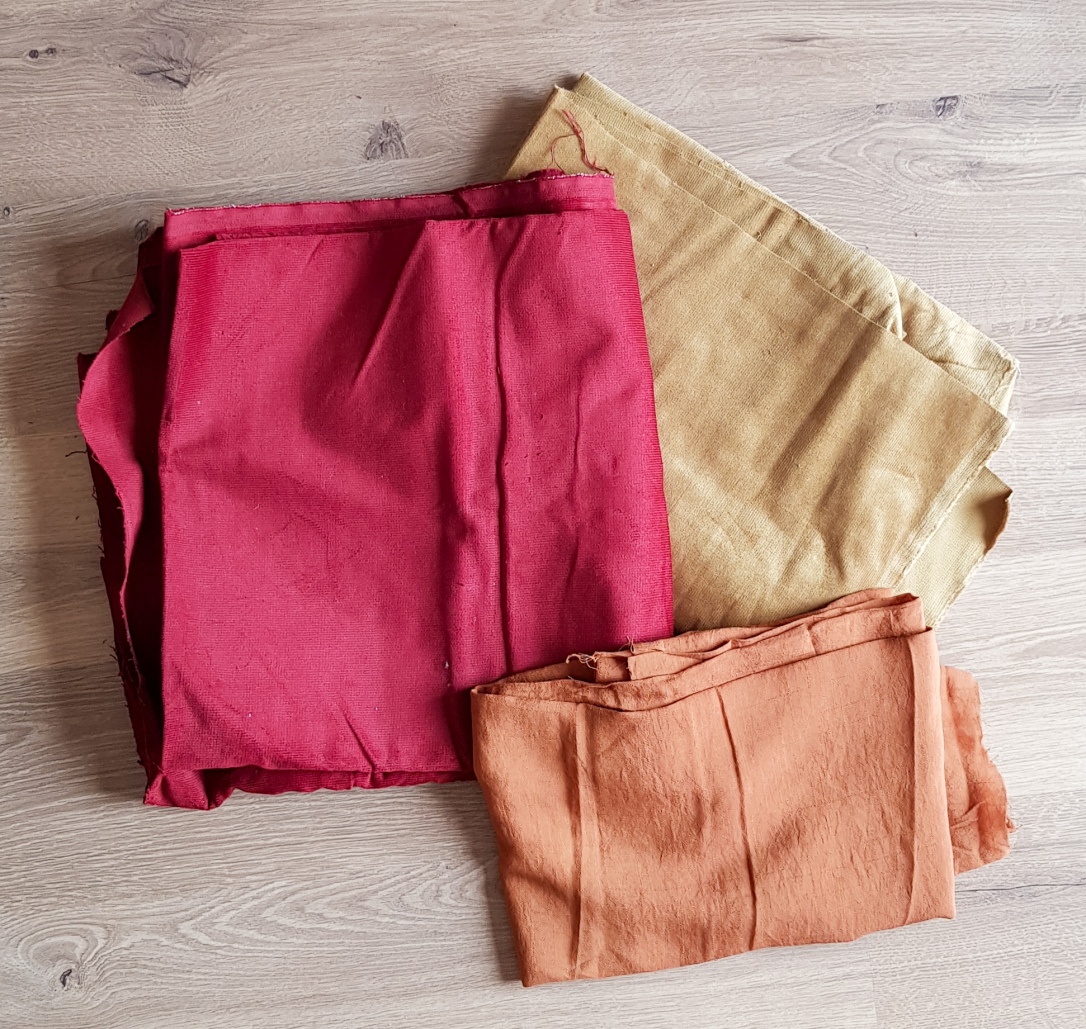 News out recently is that the Pantone colour for 2020 is Classic Blue (19-4052). It’s always interesting to see what is chosen. I’m not sure I’ve seen any previous influence from the Pantone colour but the reasoning behind this is best described by Pantone: “For over 20 years, Pantone’s Color of the Year has influenced product development and purchasing decisions in multiple industries, including fashion, home furnishings, and industrial design, as well as product packaging and graphic design.” Last year was Living Coral.

I have just joined the International Virtual Knit Night (IVKN) group and have had two sessions with them. I don’t actually have a knit group here and this is a great way to spend some time with other people who have the same interests. Both times there have been people from the UK, the US, Europe and Scandinavia, along with a couple of others from Australia. It’s not too easy to join but it ensures that only the people with the same interests are participating.

This week, seven of my friends and I booked flights to Alice Springs to visit our friend Vicki who now lives there. We will be there at the end of June, during the world-famous (I think) Beanie Festival. It will be a great sewing retreat with lots of other attractions thrown in. I have been to Alice Springs before and have hiked nearly all the gorges there, and there are many, but I’ll be happy to visit a few again with those friends that haven’t been. They are well worth visiting!

I finished up one more advent and this time it was a 12-days of Christmas advent made up of fancy beers for my husband. The real 12 days of Christmas actually start the day after Christmas Day (Boxing Day) and go to the 6th January. This 12-day advent started on 13th December, finishing on Christmas Eve instead. I am struggling to get into the Christmas spirit this year, mainly because it’s not our turn. We have Christmas every second year with our kids visiting in-laws in the alternate years. This is our off-year so we’ll be celebrating as a family the weekend after. We are fortunate that one of the in-laws live not too far away and we are invited to join them. This will be a wonderful Christmas Day as Evie will be able to enjoy the festivities. Last Christmas, she was only 2 months old. Christmas is much more fun with children! So you can see below the sum total of my Christmas decorations. When it’s our turn for Christmas we always get a real tree – I don’t think you can go past the beautiful pine smell. 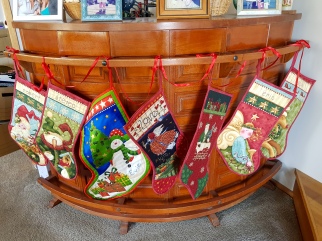 I think I’ll put on some Christmas music and go and see what other decorations I can put up to maybe get into the spirit of the season! So, until next week, I hope you have lots of opportunities for your creative pleasures!