Happy 2020 everyone! I hope you had a wonderful entry into the new year. Around here, the fires are still raging and the emergency situation continues. On New Year’s Eve, we had another pyrocumulonimbus event when the sky turned to night, though it wasn’t quite as dark as the previous one. Our son and daughter in law were leaving that day but the highway was closed so they stayed an extra night. The highway opened up to the north the next day from our point of entry though was and is still closed to the south. There has been a huge loss of property and too many deaths. For us, the situation has only been uncomfortable, with smoke and road closures and they were only minimal – the smoke cleared each morning once the northeasterly wind kicked in and we weren’t going anywhere. The situation flared on New Year’s Eve with very high temperatures, in the 40s Celcius and very strong winds. That’s when a lot of houses were lost. 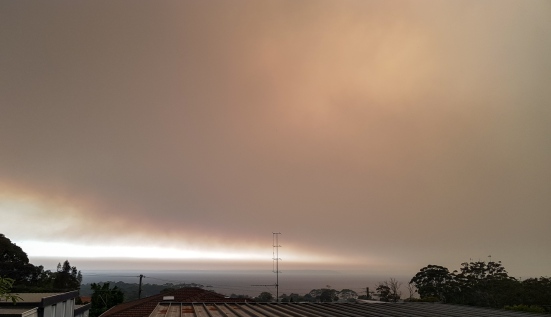 Our daughter and her husband left on Monday and I took Evie for a walk to the park via a couple of the local beaches. We’d had a few outings to the beach, trying to get Evie to accept that sand is sand and you can still have fun on the beach. Tuesday wasn’t a day for the beach and at 3.30 pm it was quite dark again. Chatting to some tourists at the shops, they told us that they’d left the beach because it was too weird being dark at that time. On New Year’s Day, we woke to a very smokey atmosphere and doors needed to be kept closed. We said goodbye to the kids and they managed to get out onto the highway and home without too much traffic. The traffic situation became critical soon after with all the people trying to flee the fires from the south and there were lots of times they weren’t allowing vehicles through. 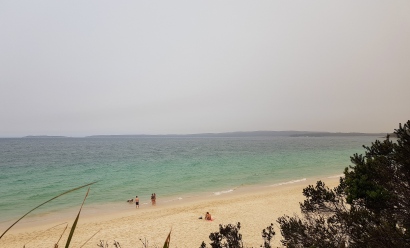 Wednesday, Thursday and Friday were spent packing. We now have 26 days to clear the house so there’s no point in waiting till the last minute. Weather predictions forecasted a repeat of New Year’s Eve and maybe worse for Saturday so on Friday we packed up and went to Wollongong to stay with our son and daughter in law. It was very precautionary as I don’t think we were particularly under threat – maybe indirectly due to embers flying around but there would be considerable devastation if the fire actually reached our place. We went more to avoid the smoke, possible road blockages and power outages which had disrupted other towns and closed shops, etc. I’m sure we would have managed for at least a week with the food in the house, particularly the canned and dry goods that we have. Regardless, it was a pleasant time with family and we spent Saturday morning at the local beach pool. 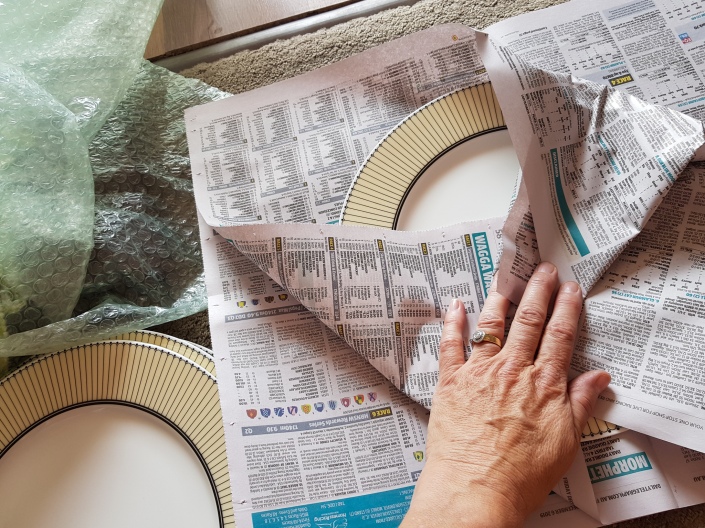 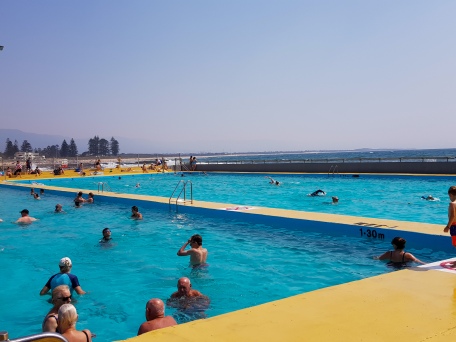 We have returned home to cool, calm and slightly smokey conditions – not bad enough to have to close doors. The fire had diverted slightly westward which was definitely in our favour. Unfortunately, it is still burning well all around.

There hasn’t been much opportunity for crafting but I’m now almost back to my regularly scheduled knitting program. I finished adding the heel to my son in law’s socks and they look quite large! I didn’t finish them before he left but I don’t think he’s in a hurry for them during the current 30 and higher degree temperatures at the moment. I’ll be able to get them to him later this month. I added a true afterthought heel which I hadn’t yet done, normally doing the waste yarn version. This time I had no idea where the waste yarn was to go but I’m really happy about that as this is a much better method.  Using waste yarn tends to leave more gaps on the heel corners than the true afterthought method. The YouTube tutorial I used was by KirbyWirby, where she leaves two stitches at each end of the cut row which keeps that section closed up. Most videos just leave those strands loose to sew in later but I tied them to the yarn I was using for the heel. I worked out afterwards that you need to see which side of the hole the ends are and tie them off on that side. I just tied them when I reached them and I know one was definitely at the top section and I tied it to the bottom section. It’s OK but I know now for future heel additions.

I was able to pick up again on my Olilia shawl. It was good knitting for distracting situations and for travelling as it’s all garter stitch. It was a little tricky increasing in the dark on the way to Wollongong on Friday night, when I had to M2L and M2R at each end of the right side rows. Last time I checked in with this project was when I had started the yellow section. I’ve now completed that with the speckled yarn and I am all but finished the green and its coordinating speckle. I’m considering the best way to start the border. The pattern only has one colour but I want to use the remainder of each mini in the correct order of the matching speckled minis. The shawl finishes with a picot bind off so I’ll also need to ensure I have enough of the final mini to complete that. I think the final colour will be a speckled one. 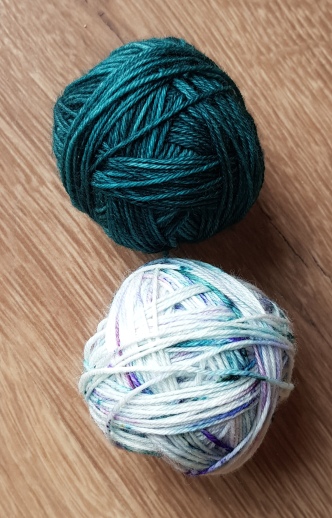 New Cast-On 1: I didn’t do any cast-ons on New Year’s Eve as I hadn’t prepared for it and a beautiful sleeping baby was guarding my yarns and needles. It was easier to sit and just knit on my Olilia shawl. On New Year’s day, though, I cast on two new projects. One was a pair of socks using some Fibernymph Dyeworks Yarn’s Inversibles. The colourway has been discontinued – I’m using the turquoise blue and dark brown version on her Bedazzled base – 75% Superwash Merino/20% nylon/5% stellina. Again, the colours are showing differently in the two pictures but the right one is correct, and you can’t see the sparkle. I’m using Mina’s Vanilla Sock Recipe for these, doing toe-up and two at a time. She provides both cuff-down and toe-up instructions, though there is only one way for the toe for the toe-up method. I wanted to try the rounded toe that is provided for the cuff-down instructions and reversed the decreases for my increases. I managed that very well but should have started one row later in the pattern so had to increase again after what should have been the last one. Also, I had knitted a round straight after casting on and probably should have gone straight into the increases. It’s really not noticeable but I like the round look and I’ll know what to do for the next one. There are so few patterns for toe-up that includes a heel, most use the afterthought heel. I have made these before and now know where my heel placement should be. This pattern has a German short row heel and mini heel flap adjustments. 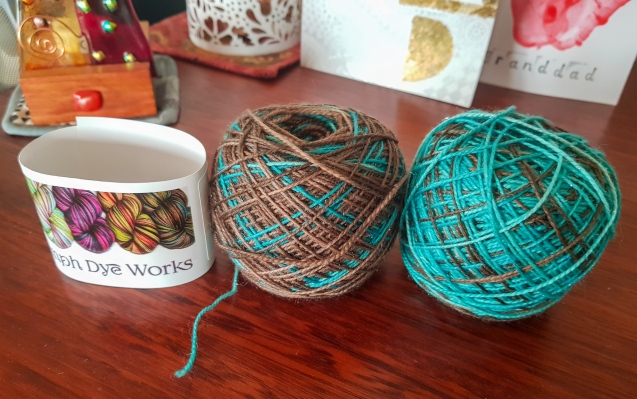 New Cast-On 2: The other cast-on was the Bitty Baby Booties for a little one due in March. I had made one booty late last year to try it out. That one was very small so this time I went up a little bit with the needle size and I’m using a worsted weight instead of DK (8 ply). I finished both the booties on New Year’s Day but I need to sew them together now. Not cast-on on New Years Day but the day after was a matching Garter Ear Flap hat by Purl Soho. I had made one for Evie and it’s really cute. I remember it was a bit small for Evie so I am knitting it with 5.0mm needles instead of the 4.5mm required. This new baby will also be younger than Evie when the hat will be worn so it should fit nicely. The yarn I’m using is the KnitPicks Swish Worsted in the Rainforest Heather colourway. It is 100% Superwash Merino and very soft and squishy. 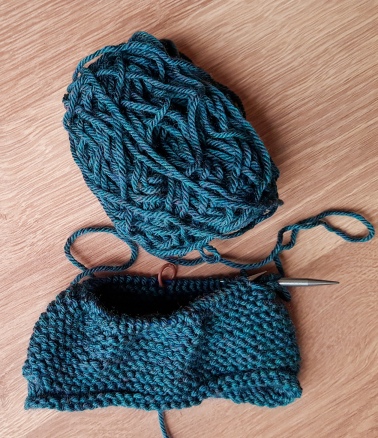 Going into 2020, I hope to “shop from my stash and my library”. As part of my packing this week, I sorted through my stash and I have some lovely yarn to use. I’ll be matching up what I can with patterns in my library that I haven’t yet made.

With the house full after Christmas and our quick trip to Wollongong, I haven’t had a chance to do any sewing but I certainly have plans. The first is to make a short-sleeved navy blue top with some navy stretch crepe I purchased recently. I need a top to go with a skirt that I haven’t worn yet and this has been on the cards for a few weeks now. The main hold-up was deciding which pattern to use. I don’t particularly want to purchase a new one for a simple short-sleeved top so will either go with the Shona dress pattern, cut as a top, or the Neenah dress pattern that I have. I’ve made two Shonas and wanted to use the modified neckline that I made on my second one on the Neenah pattern. I’m just concerned that the Shona may be a bit more fitted than I’m going for so I may cut the Neenah pattern and go with my first plan. But, then again, it may be OK. Watch this space! Hopefully, I’ll get some sewing time in amongst the packing.

I didn’t have a lot of projects to talk about this week. Though I’ll be packing, I’m hoping that everything else now settles back to a more normal routine after the festive season and that the fires die down. As I type, I’m looking out at some very light rain and this is very comforting. A little rain is better than the drying gale-force winds we’ve been having. My heart goes out to all the people who have lost everything in this crazy time. When we left for Wollongong on Friday we had to decide what to take with us. Most of our stuff is replaceable though it would take some time. My husband packed up his surfboards, golf clubs and fishing gear. I took most of my needles, current projects and a couple of future projects. We decided that if the house was to go, we’d need something to keep us sane in the aftermath. I didn’t think there was real cause to worry but there is always that little bit of doubt.

Until next week, keep safe and I hope you have lots of opportunities for your creative pleasures!