Hello friends! For us, it is now Autumn, and life is starting to take on a more settled existence. We have taken this week to get the feel of our new temporary home and make some steps to getting into a routine. The house is beautiful, the scenery is picturesque and the weather has been kind to us for a change. As it’s been dry, the mosquitoes have reached minimum status and are generally only around at daybreak and after sunset so we’ve been able to enjoy the deck. I’ve added a couple of my own pictures to make it feel like home though I’d already packed my Evie pics so I’ll print one soon. 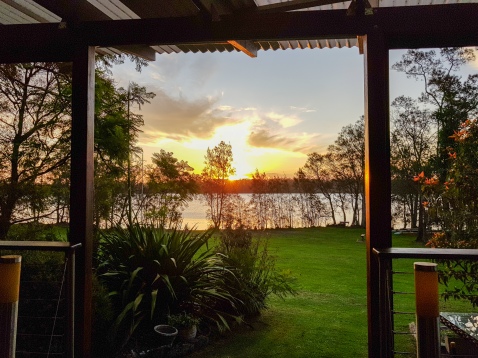 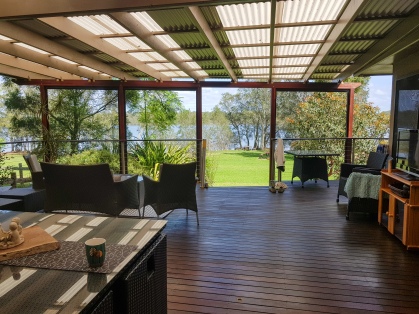 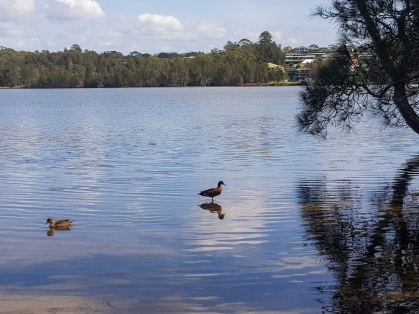 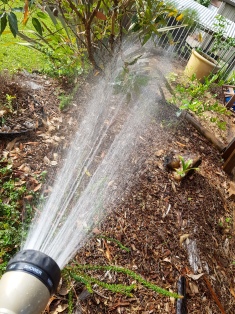 I spent some time this week with a couple of my favourite people – Evie and I went shopping on Wednesday to get out of the 30C+ heat and, on Thursday, I had lunch with Mary to celebrate her birthday (which was on Tuesday). I had some time to fill in on Friday between appointments so shouted myself a relaxing morning tea. Yesterday, Robert and I went for a walk around our new area and got to see some more views of the large St Georges Basin.

It’s all systems go at our block. I still occasionally say “at the house” but I should really refer to it as “the block” instead – at least until it starts looking like a house again. I intend to take some photos every Friday to keep a log of progress. Here is a couple of photos that show the groundwork activity happening. They are moving the dirt as required, digging out pier holes and forming up for the slabs going in at the front only. The rest of the house will be off the ground with engineering work. Don’t ask me for the technical terms; I’ll leave that to Robert and the builder. 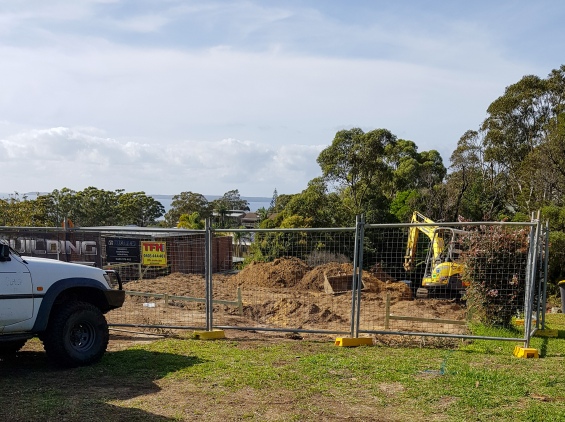 New Cast-on: I finally got to cast on my second Ranunculus sweater that I had intended as a birthday cast on. I wanted to use my only skein of Stranded Dyeworks Merino Nylon fingering and my only skein of Stranded Dyeworks Mohair Silk in Yesterday’s Bouquet that I had hand-delivered from England by Erin’s (my daughter) friend, Emily. I had procrastinated for ages with this yarn as I didn’t want to just knit it into another shawl. (On that note, I have far too many shawls! Maybe time for gifting some more.) I had knitted a Ranunculus at the end of last year, using a cotton/linen yarn, I know it doesn’t use a lot so wondered if I could add some other yarn to this precious fibre to stretch it to another Ranunculus. I wanted one in wool for the softer effect as the cotton/linen is more rustic. I actually did start this on my birthday but I wasn’t happy with the extra mohair silk I had chosen. It was burgundy and what I had in stash. I did have some navy but the Yesterday’s Bouquet colourway had some burgundy and I thought it would look good. Uh uh, it was too dark. You can see how far I got below. I added a Knitpicks Capretta fingering in the bare/natural colourway and some Debbie Bliss Angel, alternating the Yesterday’s Bouquet with each using helical knitting. My girlfriend, Mary, had some beige Angel and gave it to me. I’m loving the way this is turning out now. You can see the softer effect with the beige mohair silk. 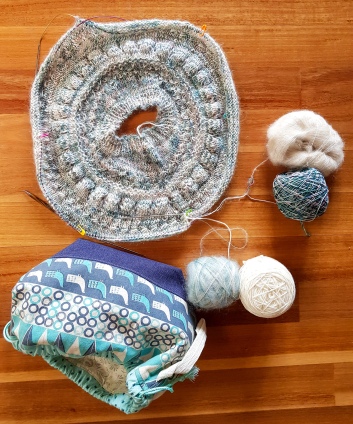 When I knitted the first Ranunculus, I used the normal pattern with a 5.0mm needle. For this one, I went with the prescribed 6.0mm needle so as to use less yarn and I wanted the looser fabric. There is also another pattern in the set which changes the bust measurement and I found a previous project made using the smallest of that version which looked great. The difference is only Section 5 and when I started that section I decided to try it on. The pattern pictures show the sweater as extra slouchy and the armholes are quite large, making it quite bat-wing. I don’t want that effect and realised that I should have probably just done the original pattern. After doing the first increase, I compared the two patterns and the new one has 10 more increase rows in total, whereas the original pattern only has 5 so I went with the latter as I didn’t need much more length in the yoke. In the end, I had to do more rows to get the sleeves to the right number so I only increased the sleeves as the body stitches were already more than I really needed. I tried it on this morning and it’s looking good though I think I’ll add some waist shaping. I also think I’ll use a smaller needle for the bottom rib. My original cotton/linen Ranunculus just hangs and kind of flares now and I don’t want that on this one.

This week’s crafting has been mainly knitting, specifically on the Ranunculus. I did knit a bit more on my Garland sweater though it doesn’t look any different to my previous post. I ran out of the first skein and I don’t have my skein winder out of storage yet. It’s silk so I don’t want to hand-wind it as it’s really slippery. I’ll be getting some things out of storage tomorrow. The other project I worked on was Anna’s Summer cardigan. I didn’t actually get to it until Friday night, apart from about 2 rounds at the coffee shop on Friday morning, and as it is such a dark navy (the picture doesn’t show the right colour) I was struggling to know what was going on. I abandoned it for the evening after tinking back several rows, several times. I’m increasing at the moment so it’s up to me to work out where the pattern sits with the extra stitches and that was the main problem. I did spend a good amount of time on it yesterday and was able to set the pattern in motion properly. I have about another 5cm to knit before I join it to the body to work on the yoke. We’re heading to Wollongong tomorrow so I’ll have some quality drive knitting time – I think I could get the yoke done this week and move onto the button bands. 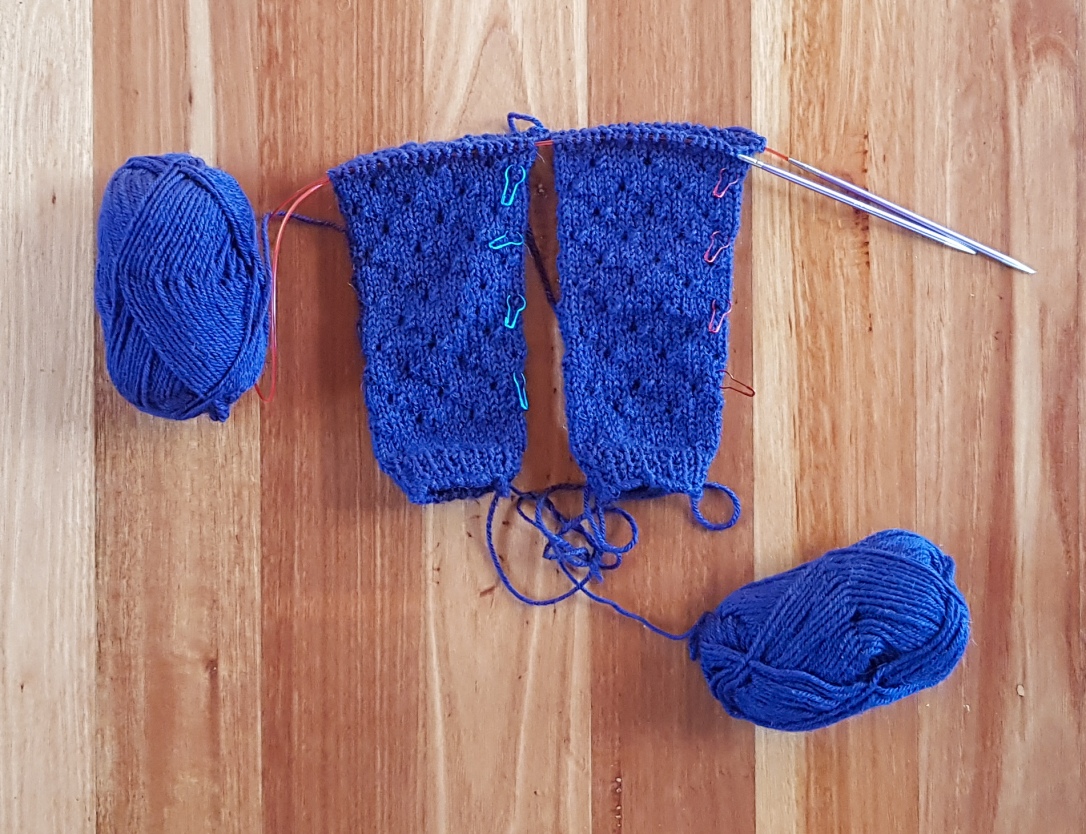 I am sorely missing my spinning wheel as it’s been in the storage unit for four weeks and I didn’t have a chance to use it for at least two weeks before that but tomorrow I intend to get it out. I am in the middle of a chain ply so really want to get that finished as soon as I can and move onto another spinning project.

I am also missing my dye pots though I’ll need to work out a new way of dyeing. There’s no way I’ll do it on the kitchen stove here as you inevitably get the odd spatter or dropped grain of dye. I’ll have to check out the portable cooktops available and I may be able to do it out on the deck. That will be how I do it when I move into my new studio also so I may as well set it up now. I have a couple of skeins that I want to dye so that I can cast on a Le Pouf cardigan.

Yesterday, I went about setting up my sewing space. I had kind of avoided that all week but wanted to get in and sew my navy Sheona top. I had cut it out before leaving the house and it being demolished – about 5 or 6 weeks ago, so really wanted to put it together. I found the navy thread, check. I found all the pattern pieces, check. I got out the instructions, check. I even found some interfacing to use for shoulder stabilisation, check. But….when I thought about the proper needle, I found I didn’t have any ballpoints in my travel kit. So, all I could do was prep the pieces by marking the notches and set it aside until either I find the ballpoints at the storage unit (I think this is unlikely as the drawers may not be accessible) or I visit spotlight and buy some more. 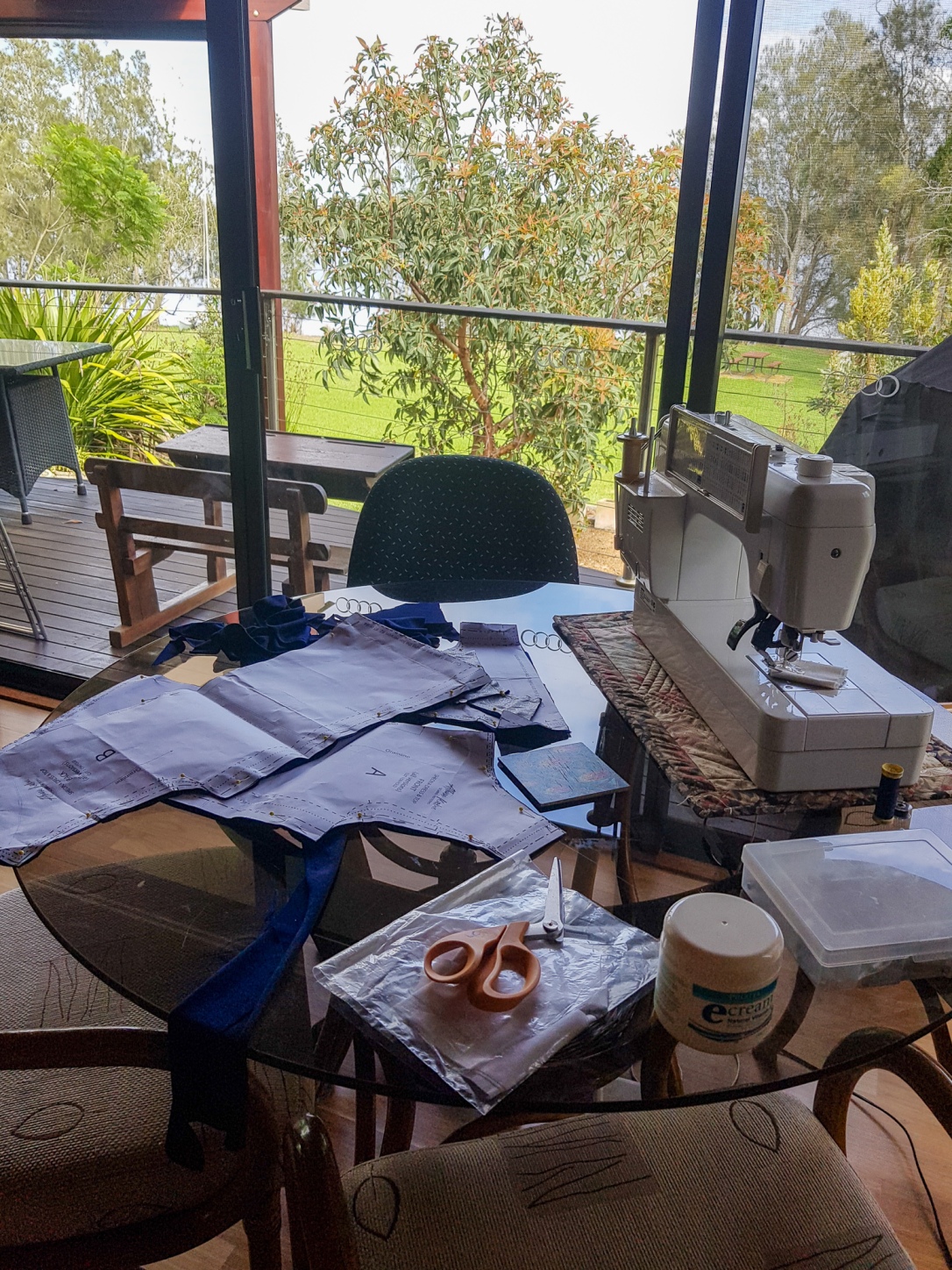 Not to be dissuaded, I knew I had other projects ready to work on so I sorted out the sewing machine trolley bag that I’m using to store all my sewing projects and settled on putting together my Kristy top by Style Arc. I had cut this one out in winter and I can’t remember why I didn’t start on it, but I think there was something that I had to do instead and it languished. All the pieces were ready, including the interfacing pieces so I got right into it. I added all the notches and trimmed the rough edges – the fabric is so fine that it moves easily when cutting. I ironed the interfacing onto the facings and sewed the darts on both the front and sleeves. This pattern uses a different type of dart on the front, at the neckline rather than the sides, and has a small dart on the bottom of the sleeves. I have sewn the shoulders and back seams on both the top and the facing and have pinned them together. I had to make the seams on the facings a good couple of millimetres smaller to fit. And that’s where I decided to stop. I’ll get back to it this afternoon and do a little bit more, though maybe tomorrow instead as that room does heat up in the afternoons. I’m following some tips from the Love to Sew podcast, particularly one that says you don’t have to finish a whole project in one sitting, just doing a few steps at each sitting is a good way to get things done and seems to be how I like to roll with all my projects.

Sleeve with side dart.

I binge-watched the rest of The Stranger series on Netflix and I wasn’t disappointed. I had read the book several years ago but had forgotten enough of it to still be surprised as it progressed through the whole series. Last night I started watching the latest season of Outlander and I’d been waiting with anticipation for this one. I think they are weekly so will watch the second tonight and see if I have to wait for another week.

Next weekend, I will be heading to Murrumbateman, which is near Canberra, for a girl’s weekend. We will be doing a Microwave Kiln Glass Fusing class. I don’t know much about it at the moment but I’m sure I can let you know in next week’s blog. I think it’s something like tiny beads of glass that are fused together inside a little kiln that works in a microwave. The class will be fun but I’m really looking forward to catching up with the girls as a group.

It’s a beautiful day here today, one of the best days of Autumn with a large dose of summer, so I think I’ll get out on the deck and enjoy it before it gets too hot. With some crafting, of course! Until next week, I hope you are enjoying your weather and I hope you have lots of opportunities for your creative pleasures!